A BEVY OF BEAUTIES: MEET THE THOLKES FAMILY 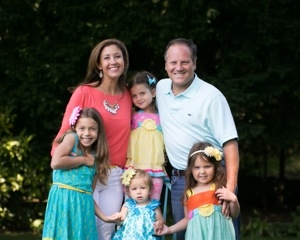 There is never a dull moment in the Tholkes household. With four girls eight-years-old and under, two of whom were adopted, the happy family of six has grown exponentially in the past few years, much to Steve and Katie’s delight.

After struggling with infertility, the couple decided adoption was the route for them.

“Nothing was working. We decided we just wanted to be a family,” says Steve, who is also an adoptee. He and Katie sent an email to family and friends, informing them about their decision to adopt.

While Katie’s aunt was at a doctor’s appointment, she mentioned that her niece was looking to adopt. It just so happened the doctor had a pregnant patient who was in her third trimester and considering adoption.

To say that things moved quickly for Katie and Steve is an understatement. They met with the birth mother, worked with another adoption resource on an expeditedhome study, and scrambled to paint and furnish a nursery. Within five weeks, they had brought their first daughter, Madison (“Maddie”), home.

“It was very exciting and we loved every minute of it,” Steve recalls.

When Maddie was less than a year old, the family moved to Kansas City, but continued their open relationship with her birth mom. It was then that they got the surprise of a lifetime.

With three girls under the age of three, the Tholkes household was filled with the joy and laughter that little girls bring, as well as the chaos that close siblings can cause. And as they had experienced before, just as everything began to settle down life threw the family another curveball.

In the summer of 2013, Katie and Steve got an email—Maddie’s birth mom had delivered a baby girl on July 26 and was working with The Cradle to place her. Were Steve and Katie interested?

“We immediately said ‘Yes, let’s do this,’” Steve says.

Like Maddie’s adoption, this one was a whirlwind. Katie and Steve scrambled to get the proper paperwork through The Cradle and prepare to bring home their fourthdaughter, whom they named Emma.

Two-and-a-half weeks later, the Tholkes family was truly complete – but a little unbalanced.

With his wife and four girls under the same roof, Steve is definitely in the minority.

“As soon as Emma is out of diapers I’m getting a male dog,” he said with a laugh. “We need some more testosterone in this household.”

The entire Tholkes family traveled from Kansas City to Chicago last August to attend The Cradle Family Picnic and spend time with Emma and Maddie’s birth mom and her family. “She is our angel,” Steve reflected.