A FAMILY FOR BABY SOFIA 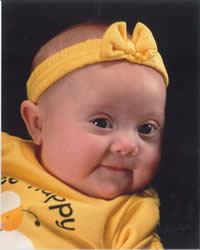 For Tammi and Marc Kotarski, meeting Sofia was love at first sight.

Baby Sofia was born on April 17 with Down syndrome and a heart defect. At one month she had cardiac surgery, and on May 28 she was discharged from the hospital to a foster family because she needed an NG tube for feeding. Several hundred miles away, on the outskirts of Buffalo, NY, lived a couple who more than anything wanted to be Sofia’s parents.

Tammi and Marc Kotarski had been together for nine years and longed for a child to complete their family. They were preparing to adopt privately when they saw a posting about Sofia and immediately contacted The Cradle.

Cradle counselor Kathleen McShane was assigned to find the right family for Sofia.

“I first talked to Tammi and Marc on the Friday before Memorial Day,” Kathleen said. “I kindly denied them when they called because their private home study needed agency approval and I had many responses about Sofia. But they were persistent. On Tuesday, Tammi called back to say an agency had approved their home study over the weekend. I thought, ‘those are the kind of parents I want advocating for Sofia.’”

The Kotarskis moved heaven and earth to meet The Cradle’s requirements. “I emailed Kathleen about 15 times,” Tammi said, “and I lived at Office Max getting our profile ready.” She and Marc also contacted the FBI directly in order to expedite their background check. By Friday just one week after their initial call to The Cradle Tammi and Marc’s profile was presented to Sofia’s birthparents. The next day, they were selected, and on Monday they were on the road to Chicago.

Tammi and Marc felt a bond with Sofia’s birthparents even before they met. “They read our letter and saw our pictures and said that they didn’t know us, but they recognized us,” Marc said. After meeting, the couples discovered they had same favorite movie. The Kotarskis also learned just how profoundly Sofia’s birthparents loved her, but couldn’t give her the life they wanted for her.

The moment Tammi laid eyes on Sofia “an unbelievably fierce love” took over. Tammi’s mom, Carol, gave her a bracelet with the engraving “miracles do happen.” This beautiful baby is even bringing some of their family back together. “Every single difficult moment has led up to this,” Tammi reflected. “We will forever be grateful to The Cradle.”