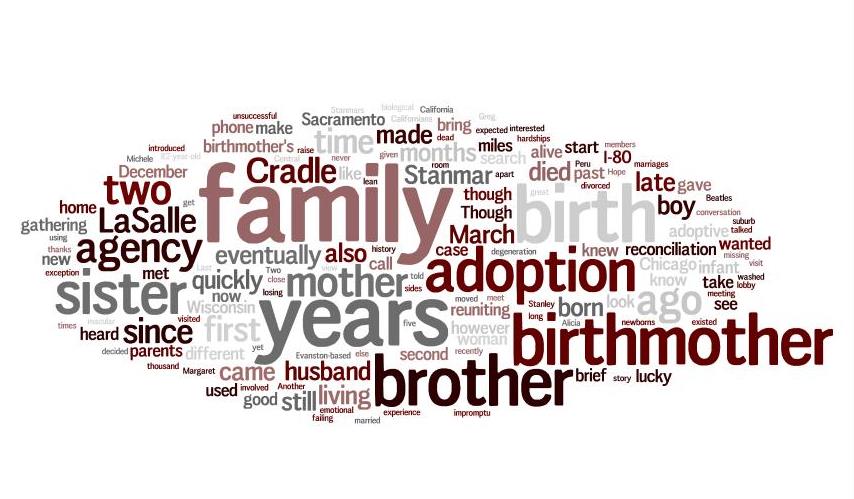 ROCKLIN, Calif. — Two thousand miles of Interstate 80 and 56 years separated me from my birth mother.

Central Illinoisan Greg Stammar, met his birthmother, and his biological sister, Shari Hunter, in March for the first time since his adoption 56 years ago.

I had not seen her since I was 30 months old, and I didn’t know she was still alive until two months ago. But thanks to Illinois adoption policy and adoption agencies like The Cradle that take reuniting birth families seriously, I was reunited with an 82-year-old woman with failing eyesight who wanted to see her boy again.

My birthmother gave me up for adoption in 1948 when, after divorcing her husband, she could no longer properly raise her family of three. After a brief, unsuccessful reconciliation two years after I was put up for adoption, a second brother was born. She finally divorced her husband for good and he died a few years later.

Mom (a term I’m still getting used to using) eventually moved from Chicago — my birthplace — to a suburb of Sacramento off of I-80, but she said she “never stopped thinking of the boy I had to give up.”

She chose not to bring up the painful past while her second husband, was alive, however. They married in 1953 and he died eight years ago.

Dealing with a new diagnosis of macular degeneration, which would eventually take her sight, prompted her to start to look for me in the late 1990s.

She eventually found me living in Peru, just off I-80 in LaSalle County and 100 miles from where I was born.

My birthmother’s story involved returning to The Cradle, the Evanston-based adoption agency with which she placed me. She had heard of the agency because of publicity generated when comedian Bob Hope used the agency to adopt his children. Though the agency normally dealt with newborns, The Cradle made an exception in my case.

Even before the paperwork was completed, Drs. Stanley and Margaret Stanmar were introduced to me and an infant boy also recently made available for adoption.

Unable to decide between the two of us, the Stanmars adopted us both. The infant became my adoptive brother, Reginald Stanmar of LaSalle, now an attorney practicing in LaSalle and McLean counties.

“We knew you went to good people, a couple of doctors, but that’s all we knew,” my birthmother said.

Last December — and years after my birthmother made her decision to find me — my own family decided it was time to start filling in some of the missing family history.

My daughters, Alicia and Erica, who were living in Chicago, visited The Cradle. They told the agency we would be interested in any inquiries from my birth family.

I reluctantly gave my consent in writing.

I could not get very excited about the search, though my adoptive sister, Michele Stanmar of LaSalle, had a positive experience reuniting with her birth brother. He has since become a close part of our family.

My brother and I had a different philosophy: We had had great parents, though they were now dead, so why look for someone else?

My sister’s search was intense and lengthy because her birthmother had no desire to bring up the past. In my case, however, it was quickly apparent that my birthmother had a different view.

“This is your mother,” the woman on the other end of the phone said.

Though I was mentally prepared for the call — I had traded e-mails with her daughter and my birth sister, since we first heard in December that they were looking for me — it still came as a shock.

My first reaction was, “Who is this? My mother died seven years ago.”

A long phone conversation followed. Then came a visit to her family in California in March.

Those calls helped me adjust to the fact that despite a gap of 56 years, I was reconnecting with my birthmother. When my family met my birthmother and birth sister for the first time in a Rocklin motel lobby in the middle of March, tears on all sides quickly washed away the more than five decades we were apart.

Later, in a quickly assembled family gathering, my birth sister hauled out the family pictures of the late 1940s and talked about her feelings about losing her brother when she was only 6. My birth sister and birth brother stayed with their mom through a period of lean times, both said I was lucky to avoid.

“It’s very strange but very nice to have you in my living room,” she said as she cut a welcome home cake. We were at an impromptu and noisy gathering of Californians I did not know existed two months ago.

When it was time for the flight home, it was easy to make the emotional promise of meeting again this summer in Wisconsin for a reunion of my birthmother’s family. After all, I had yet to meet my older brother, who could not make it to Sacramento.

Another brother, born after that brief reconciliation of my parents and two years after I was given up, is also expected to be in Wisconsin.

All agree that I was the lucky one to have avoided the hardships of those early years between marriages of my mother as she raised the remainder of her family.

I also wanted to see if some of my quirks, like eating all my vegetables before tackling the entree and preferring Bach to The Beatles, are shared by other family members besides my new sister and mother.