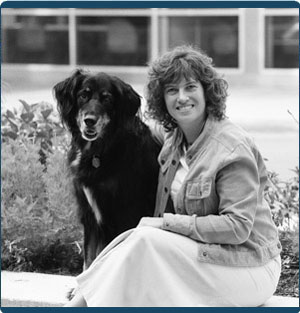 Evelyn and Donald Shaw were living in Grosse Pointe, Michigan in the mid-1960s when they began the process of adopting a child through The Cradle. Eventually they were matched with a baby girl whose name was “Anne” during her 45-day stay in The Cradle Nursery. She would become their daughter, Jane.

“At the time,” Jane said, “The Cradle was concerned that the babies were developing normally, so they would stay in the Nursery longer and have a series of doctor examinations. The agency did its due diligence to ensure that everything was progressing appropriately before a baby was adopted.” For Evelyn and Donald, Jane was their “dream come true.”

They returned to Michigan with seven-week-old Jane in the spring of 1968. The family moved to Palos Verdes, California for a brief time before settling in northern New Jersey when Jane was three. Over the years the couple adopted four more children – all boys.

Stories about The Cradle were a constant in the Shaw household when Jane was growing up. Her parents told her that The Cradle was a prestigious organization and that it was highly selective when it came to approving and preparing the families who would adopt Cradle babies. They talked about memorable details, such as the baby pictures sitting atop the antique piano in the living room. When Jane was in middle school, her mom took her to Evanston for a visit.

Another constant in the Shaw home was pets, specifically rabbits and Standard Poodles. “I loved animals from a very early age,” Jane said. “I’ve always had a strong connection to them and to nature.” This connection helped inspire her to pursue a degree in veterinary medicine from Michigan State University.

Tragically, during Jane’s third year of vet school, her father suffered an acute heart attack and passed away at age 63. “It was one of the hardest times of my life,” Jane reflected. “He provided unconditional love and was a true champion of me.” As the only daughter, she had always been “Daddy’s girl.” Dealing with her grief while keeping up with the intense demands of school was very difficult, but Jane persevered, graduating with her DVM in 1994. She went on to receive a Ph.D. in Epidemiology at the University of Guelph in Ontario, Canada in 2004.

During her studies, Jane’s personal appreciation for the human-animal bond, and her recognition of how supportive and healing it can be when you share your life with an animal, grew into a passion that helped shape a new discipline.

“What has happened over the past decade or two in veterinary medicine – and in our culture in general – is that animals have been recognized more and more as members of the family,” she explained. “The closer our animals are to us, the greater the stress and anxiety when they get sick.”

When Jane became a veterinarian herself, she wanted to find a way support other vets by giving them tools to support their clients when a pet is ill. “How do I help my colleagues,” she wondered, “so that they can be both effective and compassionate communicators who in turn can help their clients – pet families who are facing tough decisions or who are simply there for an annual visit? How do we enhance the way the vet works with the pet family to provide the very best care for the animal?”

The answer was Veterinary Communication, a discipline which Jane and a few others pioneered ten years ago, and which they continue to grow and advance. Communication is now part of the curriculum in vet schools across the country and is widely recognized as key to positive clinical outcomes for veterinarians, their clients and animal patients.

After seven years on the faculty of Colorado State University, Jane received tenure in May. This week she launched the first half of her intensive, two-part course on Veterinary Communication for third year students. In the fall they work on gathering a detailed history from the client (the animal’s “story”) and on building a safe, trusting, supportive relationship. Students come back in the spring to work on the second half of the client interview – educating and giving explanations to pet families in understandable terms, and in a logical sequence that leads to appropriate follow through.

From left, Jane, her cousin Victoria, mom Evelyn and cousin Rebecca at Jane’s tenure party. In addition to her duties as Associate Professor, Jane directs a specialized program within CSU’s College of Veterinary Medicine called the Argus Institute. Components include teaching veterinary students compassionate communication skills; a clinic support program staffed by veterinary social workers; a pet hospice program; and research to further knowledge about veterinary-client communication and its benefits. Jane also gives workshops in communication at other universities and organizations such as the American Veterinary Medical Association and Canadian Veterinary Medicine Association.

Jane considers it a wonderful gift that her mother and two of her cousins traveled to Colorado for her tenure party on August 11. While Evelyn is tremendously proud of her daughter, Jane is equally proud of her mom. “My dad was always the one to say, ‘you can do it, you can do it,’ Jane recalls. “Now I’m taking on that role for my mom.” After her husband died, Evelyn went back to school to finish her bachelor’s degree. Since then she has completed a master’s degree and is getting a certification in ESL.

Dr. Jane Shaw can practice her communication skills daily at her Ft. Collins home, which she shares with a sweet, mixed breed dog named Cliff whom she adopted through the Humane Society 12 years ago.