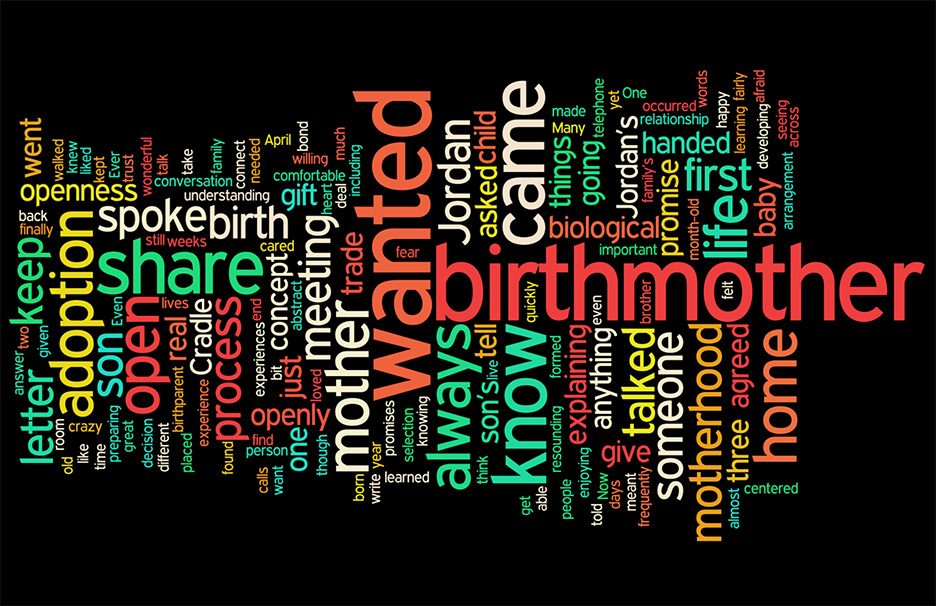 When my son was one month-old, his birthmother came to visit at our home. Many people asked if I was crazy for doing that. They said things like “How can you do that?” and “Aren’t you afraid for her to know where you live?” My answer was a resounding “No!”

When I came to The Cradle, I didn’t have a great deal of understanding about open adoption. As I went through the process, I learned more about developing a relationship with the biological parents and being open to that process. Even though I felt that open adoption was important, the concept of openness became real for me when I met my son’s birthmother.

What I found in Jordan’s birthmother was an unexpected bond that formed quickly. It was as if we needed to connect because we were about to share a child. She wanted to get to know me just as I wanted to know about her and her family. We spoke openly about our lives and the child we would share. She would birth him and I would be his mother. (My son was born a week after our meeting.) We would always share motherhood.

Now that there was a person that went along with the words “birthparent,” things were very different for me, very real. When my son’s birthmother was finally sitting across from me, willing to give me the gift of motherhood, it occurred to me that I could not keep her from seeing him and knowing that he was being loved and cared for. I couldn’t. I wouldn’t. And, I would not fear that if she saw him again she would want to take him back. I had to trust her, and the adoption process.

During our match meeting we talked openly about visits and telephone calls. We talked until we were both comfortable with our openness arrangement. It was an experience that I would not trade for anything.

I think because she had not yet given birth, the baby was a bit of an abstract concept, but our conversations centered around preparing for his arrival. She wanted me to be at the hospital for his birth, and I agreed. I asked if she would write him a letter explaining why she placed him for adoption. She agreed. At some point during our meeting, his birthmother wasn’t just someone whose baby I wanted. She was someone who I wanted to keep my promises to, someone who I knew in my heart was going to keep her promise to me and give me the gift of motherhood.

On April 4, 1997, she kept that promise when she walked into the room at The Cradle and handed my son to me. When he came home with me, he was two days old. She also handed me a letter for him explaining the decision she had made for his life. She even spoke about her selection of his mother. That letter meant so much to me, I would not trade it for anything!

When Jordan first came home, his birthmother and I spoke almost daily for about three weeks and fairly frequently for the first year of his life. She wanted to know how he was, if I was enjoying being a mother.

One of our best experiences was when Jordan was three and he talked to her and his biological brother for the first time. Ever since Jordan came home, I’ve always wanted to share what was going on in his life with her, and being able to share his learning to talk with her was absolutely wonderful. At the end of one conversation, she told me that she could tell he was happy–she could tell I still liked being a mother. Jordan’s birthmother will always know where to find us and we will always be open including her in our family’s life.