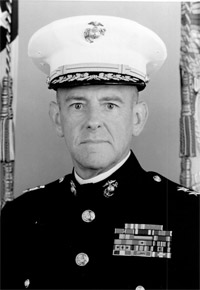 John Anthony “Tony” Studds came to The Cradle as a newborn in 1937 and grew up in a wonderful family. His father, the late Rear Admiral R.F.A. Studds, was a Retired Director of the U.S. Coast & Geodetic Survey and for whom Mt. Studds in the underwater Aleutian Islands is named. Tony spent thirty-four years in the U.S. Marine Corps – his last eight as Major General.

While Tony always knew he was adopted, he never really cared to search for his birth family. “I recall somewhere in my early teen years, my sister started asking my mother questions about what her birth mother was like and I could tell that she was very sensitive to it. I decided then that it was an area I wasn’t ever going to get into. It didn’t mean that much to me,” he said.

After Tony’s mother, Margaret, passed away in 2000, his daughters became interested in genealogy and started urging him to trace his bloodline.

“That’s when I decided, I’m not getting any younger, so if it’s going to happen I probably ought to do something about it now,” he said.

Earlier this year, Tony sent an email from his home in Florida to Nina Friedman, Director of Post Adoption Support at The Cradle. They scheduled an Informational Consultation and Nina was able to help him obtain his original birth certificate and provide him with non-identifying information about his birth mother.

Tony learned that his birth mom was 18 years old when he was born. She was working as a waitress, her father had passed away and she didn’t know where to turn.

“When Nina gave me what information she could about my birth mother, I broke down,” he said. “That humanized her and I could certainly understand what she was going through with me at that point.”

Using his original birth certificate, and the advice he received from Nina, Tony was able to identify his birth mother’s town of residence in 1937. He called the records office there to see if he could unearth anything, and as it turned out, he got more than he bargained for.

The wife of his birth mother’s nephew used to work at that records office, so the clerk shared her phone number with Tony. Later that day, he called.

“I said, ‘I’m trying to find Lenore’s final resting place. I believe I’m her son and I wanted to visit her site’,” Tony explained. “The woman on the other end said, ‘She’s not dead. She’s living in Oregon!’”

Tony couldn’t believe what he’d just heard. “I was taken aback because I was so sure she’d be deceased.”

Nina says that very often information can catch a person off guard. “Searching for birth relatives, finding information, and of course, connecting, can be extremely emotional. Whether you’re getting information from The Cradle or searching on your own, it helps to have an Informational Consultation with me first. We can discuss search options and respectful ways to search and reach out. We can also talk about possible outcomes to help manage your own expectations.”

Looking back on the experience, Tony says he could not have located his birth mother without the help of The Cradle. “If I had to pick one word to sum up what they offered me, it would be guidance: Guidance as to what route to take, guidance on what’s available and guidance on how to get into a search.”

If he would have left it to his daughters to keep searching around online, he doesn’t think he would have ever found his birth mother. For those interested in locating their birth families, Tony said it isn’t something that should be stumbled into and that The Cradle is “absolutely the way to go.”

“The Cradle is a great place to begin the process because as you move through your search they don’t just help you find the answers, they prepare you for the range of answers you might find,” Tony said.

He ultimately decided that with regards to his birth mother, “probably the best thing to do is just to let life continue for both of us and not to try to make contact.” Sadly, Tony recently learned that Lenore died in late August 2013, the day before her 95th birthday. But he has connected with some of his first cousins, who shared with him pictures of his birth mom at various stages in her life. He and his wife plan to visit her grave in San Diego.

Tony’s family is very close knit and has been terrifically supportive along the way. His daughters are pleased with the results of his search and he’s glad they now have more information to help fill in the family tree.

“I’m just super thankful for the entirety of the process.”