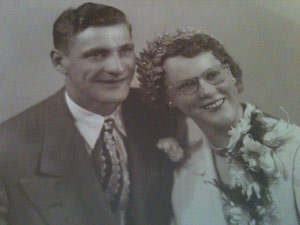 Published July, 2012
By The Cradle Staff

Marcella Erickson is a resilient woman. Compelled by circumstance to leave home at age 16 and fend for herself, she lived with a family for a number of years as a childcare provider. One day her good friend Loretta, who had trained at The Cradle as an infant nurse, told Marcella that it had been a wonderful experience and that she should consider it.

“I thought about it a lot,” Marcella said, “but I was terrified of the city. Growing up in White Hall, I was used to life in a small town so the idea of moving to Chicago or Evanston was frightening.” Eventually, however, she decided that White Hall had nothing to offer her. Marcella got in touch with Loretta, screwed up her courage and headed to Evanston. “My first day at The Cradle was January 17, 1949,” she declared as if it was just yesterday. “I was 28 years old.”

Marcella joined a class of 22 student nurses who lived in a house on Ridge Avenue adjacent to the main Cradle building and Nursery. They had a curfew and ate all their meals at The Cradle, prepared by two resident cooks. The trainees earned a monthly stipend of $25 during the one-year program. In her spare time, Marcella would take a walk to Vogue Fabrics in downtown Evanston and use some of her earnings to purchase fabric to make clothing and other items – an activity she enjoys to this day. “I certainly remember it with a great deal of thanks,” Marcella said.

When Marcella was at The Cradle, the Nursery could accommodate up to 60 babies in several different units. Babies typically spent quite a bit more time in the Nursery in those days than they do now, and the nurses would often get attached to a particular baby they cared for. Marcella’s favorite was Inez.

“She was in Unit E,” Marcella explained, “which was for the babies who were a little older. She came to The Cradle when she was a newborn, but she was part Caucasian and part Asian, and in 1949 that was a unique situation.” Marcella thought Inez was the cutest baby at The Cradle, and liked to take her for walks in the buggy. She asked her supervisor, Miss Mitchell, if she could make a dress for Inez.

“One day I was called to Ms. Mitchell’s office,” Marcella recalled, “and there was little Inez in a nice basket because she was going home. A couple from out west came to adopt her and they wanted to see me because they appreciated the dress. They wanted me know that they would tell their daughter she was always loved and that would be her christening dress. I have often wondered about Inez – she would be about 63 years old now.”

Marcella recounted another very touching story from her time at The Cradle. She was asked to get a baby in the Nursery, Charlie, ready to be shown. A beautiful girl walked in with her mother and saw the baby through a glass window. “She took one look at him and started to cry,” Marcella observed. “I was crying, the nurse at the desk was crying, the mother was crying. Then about three days later we were told to get Charlie ready again because he was going home. It turned out the girl had married Charlie’s father – the baby looked just like him – and she was coming to take him home with her.”

“Even back then,” Marcella said, “we were providing shelter for babies while the birth mother made up her mind. It was heartbreaking to watch, but also very special.”

Marcella’s heart took a different turn when Roy Erickson came to The Cradle. A World War II veteran, Roy was hired as the building engineer in July of 1949. “His presence definitely stirred up a lot of talking,” Marcella recalls with a smile. “All of the students – most of whom were just 18 – would ask about ‘the new engineer’ and thought he was nice looking. But when I saw him I thought he was just so-so. I was a bit older and more standoffish.”

Finally, though, when she had a camera that needed to be fixed, Marcella asked for Roy’s help. “From then on we continued to talk and on my birthday, October 23rd, we had our first date – at the zoo of all places. He hinted afterwards that he wanted to see how expensive I was! We got engaged at Christmas and were married the following July in 1950. Roy worked at The Cradle for 24 years and we lived in south Evanston on Madison Street for 30 years.”

Their love story lasted 51 ½ years until Roy’s passing in 1991. Marcella considers her “finest hour” to be the couple’s son, Mark, who was born in July of 1951. Although Mark lives in North Carolina, he and Marcella are close and have always had a great relationship. When he came to pay his mom a visit last fall, he told her that he wanted to see The Cradle. “So we stopped by and saw Roy’s picture on the wall,” Marcella noted with pride, and a touch of sadness. “It’s a beautiful place and I look forward to visiting again soon.”