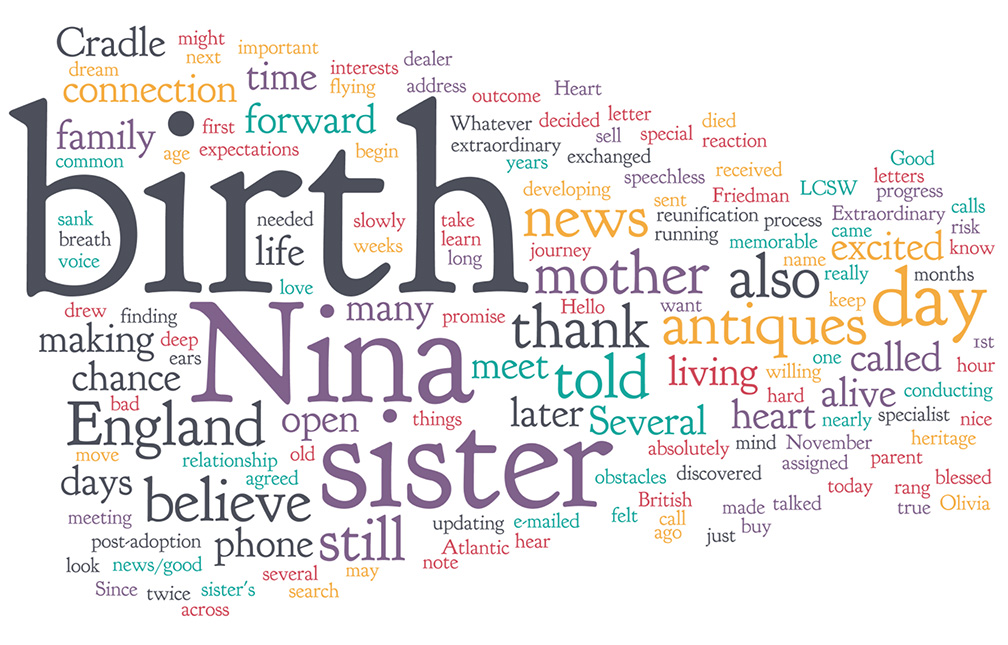 On November 1st, 2005, I will be flying across the Atlantic to England to meet my birth sister for the very first time. At the age of 55, I decided to keep a promise that I made to myself years ago — to look for my birth mother. I felt there might still be a chance that she was alive, but there was also a chance that if she was alive, she may not want to meet me. But I was willing to take that risk. Whatever the outcome I needed to move forward on this journey with an open heart, an open mind, but with no expectations.

So I drew a deep breath and called the Cradle to begin the reunification process. I was assigned to Nina Friedman, LCSW, a post-adoption specialist, who would be conducting my birth parent search. Several weeks later I received a call from Nina with bad news/good news. She told me my birth mother died in 1978. My heart sank, but she also told me I had a birth sister living in England. I was so excited that there was living connection to my family.

Over the next several months I would hear from Nina updating me on the obstacles she was running into or the progress she was making.

Then one very special day Nina e-mailed me: “Good news. I have an address for your birth sister and a letter will be sent out to England today.”

Heart be still. I can’t believe this, I said to myself. My dream of finding my birth family was really coming true. It was just so hard to believe after all this time.

Not many days latter Nina called with news that she had spoken to my birth sister.

Nina told me that my birth mother had been in antiques and my birth sister is an antiques dealer. I also buy and sell antiques. It was so nice to learn where my love of old things came from.

Nina agreed to forward a note to my birth sister whose name I still did not know. Several days later the phone rang and a very British voice said, “Hello. this is Olivia.” I could not believe my ears. I was so excited and nearly speechless. We talked for an hour and discovered we had many common interests.

Since that memorable day we have exchanged letters and phone calls slowly developing a relationship. It will not be long before I will meeting my birth sister and making a connection with my heritage. That day will be the most important day of my life.