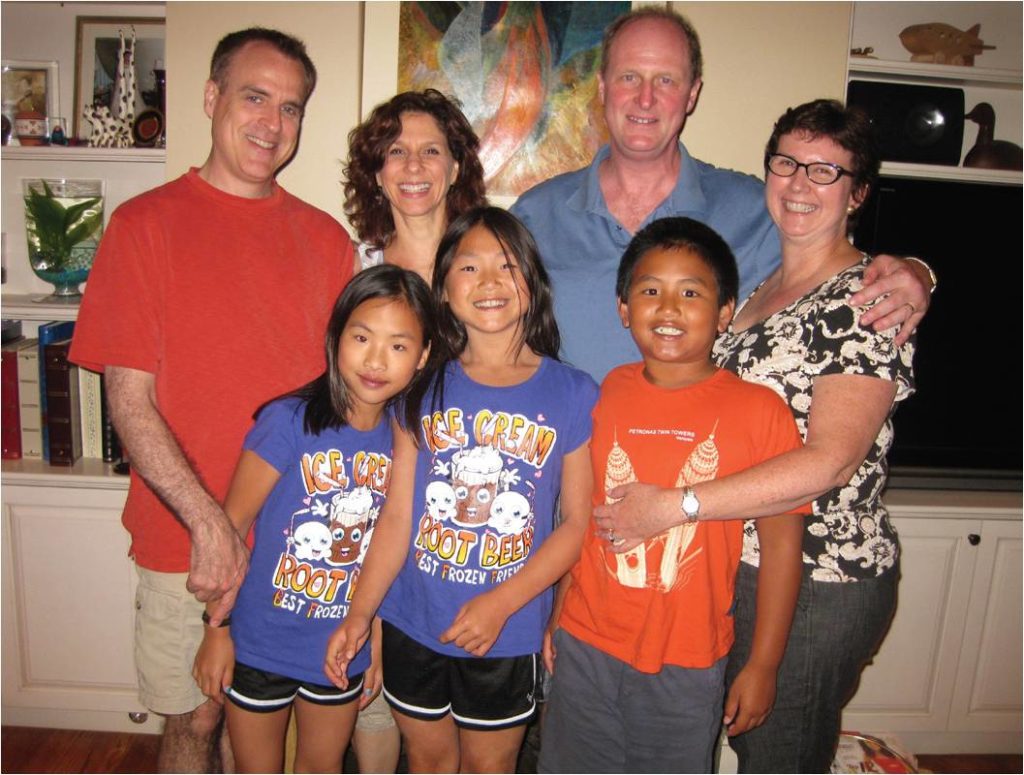 The two girls have the same straight, lustrous black hair, parted in the middle. They both do gymnastics, play musical instruments and love panda bears. They wear matching t-shirts and shorts. One is slightly taller than the other. Standing side by side, you might mistake them for sisters – which for all intents and purposes they are.

Mia Connelley and Jenna Dike, both 9, were born in Korea two weeks apart and were adopted by Cradle families who live 6 miles apart. Mia’s parents, Toni DiDonato and Kevin Connelley, had first met Jenna’s parents, Siobhan Flynn and Alec Dike, in an Asian adoption support group started by The Cradle.

Mia came home to the U.S. in April of 2002 and Jenna one month later. When Mia’s birthmother delivered a baby boy that November, and realized that she could not provide for him, she decided to place him for adoption as well. At seven months of age that baby became Siobhan and Alec’s son, Cameron. Mia already had a brother at home – Toni and Kevin’s biological son, Dylan, who was 8 when his baby sister joined the family.

The Cradle, which conducted the home studies for both families, and AIAA, the international agency that finalized their adoptions, made sure that Cameron would be placed with a family who lived near his biological half sister. Siobhan and Alec weren’t expecting to return to Korea and bring home a second child just 13 months after Jenna came home, but this unforeseen turn of events has proven to be wonderfully beneficial for the children – and their parents.

Mia and Jenna have played together since they were around nine months old. Today, they enjoy watching TV together, especially Animal Planet and the Cartoon Network. “We like to stay up late,” Mia stated enthusiastically. “We like to talk about panda bears and play made up games. And we have our back flips!” Cameron, 8, prefers spending time on the computer. He has a blue belt in karate and takes piano lessons. Mia plays the piano, too, and studies Tae Kwan Do. Jenna opted for the violin. Toni describes all three as multi-faceted, very physical and “high energy.” Alec likes to take them swimming and on long bike rides.

There is also typical sibling rivalry among the three. “Sometimes when I get mad at Mia I start yelling at her,” Jenna admitted. Both girls think Cameron is OK, but that he can be pretty annoying at times. The girls annoy him, too, but then he turns to Dylan for brotherly support.

The adults offer a more nuanced view of this dynamic. “With Cam and Mia there are tremendous similarities in their personalities,” Siobhan observed. “Jenna is quite different than both of them so she’s a nice balance between them.” Jenna gets upset if Mia and Cameron spend too much time together on the computer, because she’s just not as interested. If the girls are playing with their stuffed animals, Cam wants no part of it.

There is a unique inter-sibling dynamic within each family as well. Siobhan notes that while Jenna and Cameron get along very well, and enjoy doing activities together, they also like to pick on each other. For example, Jenna was sleeping one morning and Cam wanted her to be awake, so he opened her eyelids and ordered, “Get up!” “He looks for her first thing each day,” Siobhan said.

Despite the 7 ½ year age gap between Mia and Dylan, “it’s almost like they’re only one or two years apart,” Kevin remarked. “They’re very competitive.” “She’s right up in his grill all the time,” Toni added. “But I think they adore each other.” Dylan, who turned 17 in April, gets a kick out of his feisty little sister. He began babysitting for her in the last year and a favorite activity is watching movies, although choosing one they both agree on can be a challenge. On a recent family vacation to San Diego, Mia was finally old enough to go on rides with Dylan. “They were fantastic,” Toni enthused. “They had a great time together.”

The two families see each other around once a month – more frequently in the summer – and celebrate Christmas, birthdays, Easter and other holidays together. There are also occasional sleepovers. Each considers it a blessing to have the others in their lives. When you adopt a child internationally, Toni explained, there is uncertainty as to how they will relate to the fact that they are adopted, and to the fact that they come from someplace else. The relationship between the children, she believes, offers them a sense of security and familiarity:

I think it is really great, especially for Mia and Jenna, that they have each other. It helps them because they’re living a similar experience and they can talk about it, share it. Cam and Jenna are growing up together, but Mia is the only adopted one in the family. I can’t even express how much it has affected her to have both Jenna and her biological sibling in her life. I imagine it makes her feel safer in the world and more connected.

Siobhan feels that this connection has also helped the girls foster a sense of self. “Mia and Jenna started to realize that they look alike when they were between 4 and 5,” she said. “Having someone who looks like you, acts like you, and likes the same things is an important part of developing your identity. I think it gives them comfort.”

The children began asking questions early on, and are just now beginning to grasp the concept of birthparents, half siblings and how everyone is related. In addition to each other, they have friends at their schools who were also adopted from Asia. Most are girls, so it has been harder for Cam to find someone like him – but he does have his sisters, and Dylan.

All three kids love Asian food and are proud of their Korean heritage. Jenna gets really annoyed when someone asks her if she’s Chinese. The Korean flag hangs in Mia’s bedroom. When asked if they want to go to Korea one day, the response was an emphatic “yes!” “When we’re 16,” Mia declared, “Jenna and Cameron and I are all going to go by ourselves and visit there.” “But we won’t be old enough,” Jenna protested. “OK,” Mia conceded, “maybe when we’re 18.”

In the meantime, Siobhan is planning to take the three kids to The Cradle’s annual Autumn Moon Festival on October 22nd. They’ll be wearing traditional Korean attire and look forward to their favorite part of the event: dancing!