ADOPTING BELICIA – THE CALL THAT CHANGED OUR LIVES 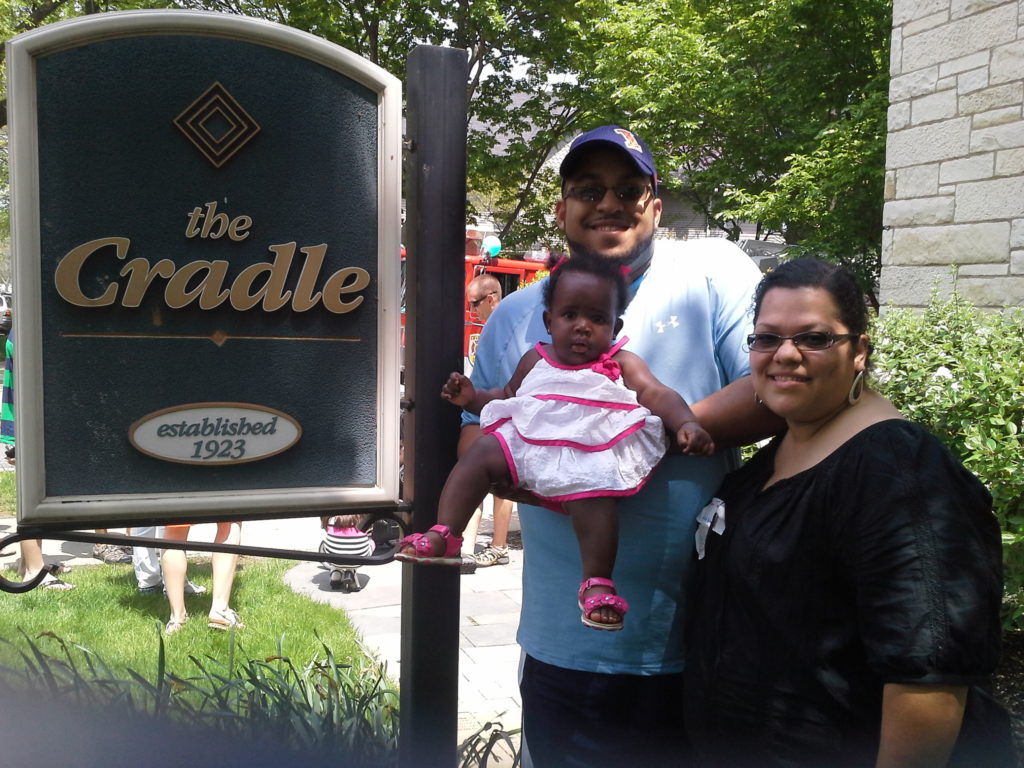 On June 23, 2012, Sandy Thomas received a phone call that would change her life forever. Her Cradle Counselor delivered the news: she and her husband Greg were going to be parents.

Less than a year earlier, in September of 2011, Sandy and Greg attended a Sayers Center Informational Meeting. Greg was the first to consider adoption knowing their chances of IVF success were slight due to medical problems. Sandy was slower to come around, but after a lot of research, the Thomases went in with open minds.

They clearly remembered their feelings after the information meeting. “We had so many emotions running through our minds, but we knew the end result was going to be getting our baby.”

The Thomases relied on faith to help them stay optimistic throughout their journey. They also stayed involved, attending classes and taking advantage of the services and counseling The Cradle has to offer.

“The Cradle really helped prepare us for what was next,” they explained. “You can’t ever be prepared for everything you go through emotionally, but they were able to say this is next, or this is normal, so we really appreciated that.”

Just like many other waiting adoptive parents, the Thomases had their fair share of anxieties: What would the birth mother be like? What medical issues will the baby face? Will the child resent us?

These fears were assuaged by the guidance given by The Cradle and programs available to waiting families. “We saw Dr. Dan Griffith speak,” they said. “He did such a great job of explaining and remedying all of our fears and he made us feel more relaxed.”

After waiting nine months, Greg received a phone call asking if they would like their profile to be presented to an expectant parent. A day later, while driving, Sandy got the call that the birth mom wanted to meet them in person. After calling Greg at work and excitedly screaming over the phone with him, the two prepared themselves for the meeting.

“We were very scared,” Greg recalled. “Were they going to like me? Will my jokes be funny? I had to be the best me, but also be real, but not too real or she would think we were weird.”

Being a religious couple, they said a prayer and put their faith in God, knowing that if this was the child who was supposed to be placed with them, it would all work out. And it did.

Born a month premature, their daughter, Belicia, faced some issues with eating and digestion and spent some time in the hospital, but soon went home with two very happy parents.

Now, a year and a half later, Belicia is a smart, head strong little girl who loves to sing. “Greg always sings to her, it calms her down and makes her happy,” explains Sandy. “When she wakes up in the morning she doesn’t cry for us, she lies in her crib and sings.”

The Thomases are still working on building their open adoption relationship with Belicia’s birth mother. Like many others who were beginning the adoption process, Sandy and Greg had limited knowledge about openness and had their own reservations. Greg’s experience with the foster care system led him to be wary of contact with birth relatives.

“My mother had foster kids in the house growing up, and whenever the birth mother got involved they usually were taking the child away,” Greg recalled. “So when I became calm with the idea that openness does not mean our child could get taken away, but instead it means knowing her birth parents and birth family and understanding her own DNA, I was okay with it.”

Cradle classes and workshops helped the couple learn more about what open adoption really looks like, and how it would benefit their child. “She will not be left with difficult questions,” Sandy observed. “What is best for her is to know the answers, know her roots.”

Sandy and Greg send Belicia’s birth mom frequent text messages with picture updates to make sure she knows she’s an important part of Belicia’s life. “Any time there is a first, or Belicia does something cute, I send her a text with a picture,” Sandy tells us. “We let her decide when she’s ready for a visit, but we’re open to whatever she is comfortable with.”

Sandy describes their life with Belicia as a “constant adventure that we couldn’t enjoy more”.