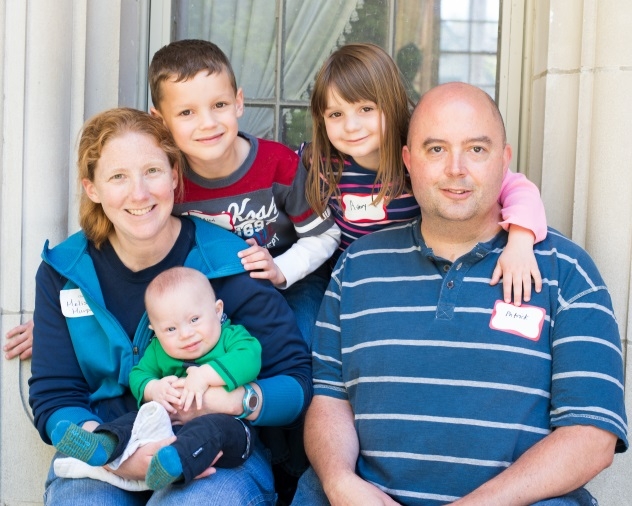 Patrick Murphy doesn’t understand why some friends put on the sad, sympathy face when they learn he has a son with Down syndrome.

“I feel like I have a super baby,” Patrick says. “Jack is the happiest baby I know, he is blowing past all the milestones his physical therapist set for him – he is just like any other kid, except he is surpassing every goal we set for him.”

The road to adopting Jack was bumpy. Patrick and Melissa had two biological children, Mason, 7, and Avery, 5, when Melissa learned she was not able to bear another child.

“We always wanted to have at least three kids,” Patrick says. “We decided to try the adoption route.”

Unfortunately, the Murphys unwittingly signed up with an unethical adoption provider based in Woodlands, Texas. They ended up getting caught in a scam that cost them months of heartache and thousands of dollars.

“There are many families who were defrauded by this entity and the FBI is investigating,” Patrick said. “They prey on the hopes of adoptive parents. The whole experience left us feeling so frustrated and disheartened.”

After being so victimized, the Murphys were wary about proceeding. But their dreams of adding a third child to their family ultimately led them to The Cradle.

“Melissa does all the research, so she knew about The Cradle and that they were looking for a family for a special needs baby who had been drug exposed,” Patrick said. “Those birth parents chose another family, but then our Cradle counselor called and asked us if we would consider a little boy with Down syndrome.”

Patrick and Melissa had never discussed adopting a child with Down syndrome, but when they heard about Jack, they did some research.  Melissa is a physical therapist and is connected to families in the area who have children with special needs.

“Melissa called her friend who has two children with special needs,” Patrick says. “This friend told Melissa something I always remember. She said, ‘Don’t pass up the chance to do this – you will regret it.’”

After discussing it, Patrick and Melissa decided to move ahead and get more information about Jack. They reviewed medical reports, test results, nurses’ notes and evaluations. But for Patrick, there was one moment he knew Jack would be his.

“You know how they say when you see the woman who will become your spouse, you just know? That’s how it was for me. Once I saw Jack’s picture, I said, ‘That’s it … we have to do this.’”

Jack was born on October 23, 2013 and was in The Cradle Nursery for about five weeks.  Once they agreed to adopt him, Melissa made the drive to Chicago to visit.

“I was home with the other kids, and there was a terrible storm, tornados even,” Patrick says. “Melissa texted me from the Nursery to tell me she met our son, and that I should make sure the trampoline in our backyard was secure!”

Like Patrick, upon seeing Jack, Melissa knew he was meant to be their son.

“The first time I met Jack, I knew 100 percent we would adopt him; he did not seem like a stranger to me.  It felt so right taking him home and the moment we got him home, it was as if he was always a part of our family!”

She describes Jack’s placement day as surreal. “I was in disbelief that after that long, crazy adoption journey, it could culminate in such a smooth and enjoyable process through The Cradle.”

In the ensuing year, the family of five has fallen into a hectic, but happy groove. They are busy with school activities, scouts, sports and lots of therapy appointments for Jack, although Patrick calls the fifteen-month-old “remarkably healthy.”

“He is surprising all of his therapists,” Patrick says. “We weren’t sure how our older kids would accept having a sibling who has medical needs in the house – they tend to be jealous of each other sometimes. But they have been terrific, really helpful with Jack, playing with him and giving him lots of kisses and hugs.”

Mom Melissa looks back now on the past few years and realizes that all the twists and turns the family took ultimately led them to the right outcome.

“I truly feel the long adoption journey we had was meant to lead us to Jack,” she says. “He is the perfect addition to our family.
He has taught us so much already.”

When asked what advice he would give a family who might consider adopting a child with special needs, Patrick responds: “My wife and I are ones who just put on our boots and gloves and get to work. You make it work, you find a way.”

“I always remember that friend who told us not to pass this chance up, that we would regret it. That turned out to be so true. This little guy has changed our whole family, for the better. We haven’t looked back.”