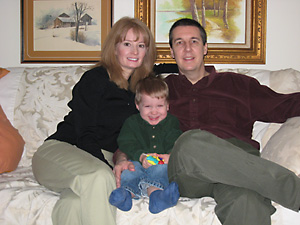 Adventures In Russia
By The Cradle Staff

“When we first saw Alex’s picture, we knew he was our son,” said Joan Romer. In fact, the baby photos of her husband Bob looked so similar to 18-month old Alex that they brought them to court in Russia. When the judge saw them, she called others in the courtroom to look at the photos, and their jaws dropped. Soon after, the judge told Joan and Bob, “He’s yours.”

Alex was a year and a half when Joan and Bob first met him. At their first meeting, he did not warm up to them immediately, especially Bob. But considering that he was in a hospital room with doctors, nurses, consultants, and two future parents, this was not surprising. So Bob and Joan returned that afternoon to revisit the “cute little boy,” and then, after crying for about 12 minutes in Joan’s arms, he stopped and nestled his head in her shoulder.

Joan and Bob were specifically impressed with the people of Pskov, the town in which Alex was born. For example, out to dinner at a mall one night, they met a group of teenage Russian children who came over and asked them questions, trying to practice their English. On that first trip to Russia, Bob and Joan also took some time to vacation, and spent an extra five days in Moscow. As Bob said, they are “adventurous,” which helped them to enjoy the experience fully by trying food from street markets, taking the “museum-like, gorgeous” metro, and more.

On the third and final trip, Bob ended up staying in Russia for an extra ten days because of a passport requirement. He spent an hour or so visiting Alex at the hospital each day, and the two began to build a bond. Then, Joan returned and they finished the process of adopting Alex.

Packed into a tiny car, going from the hospital to the train station, as Joan and Bob were saying “bye Pskov!,” Alex waved to the people at a bus stop, and, according to Bob, even “had a little tear on his face.” Still, as soon as they brought him back to the hotel, he was “giggling, laughing, and running down the hallways.”

Alex’s new parents found that he made remarkable changes once they brought him home: “he was like a match that was lit and exploded with personality,” Bob said. Since Bob’s grandparents are Russian, he knew a few dozen Russian words, such as food and comforting things to say, that he used to help with Alex’s adaptation to America. An integration with English words helped Alex to understand English within a week or two, along with establishing and solidifying a family bond.

Although Alex was originally afraid of Bob, now he is his “best pal” and loves to do whatever his father wants to do. Together, they have gone downhill snow skiing, inner-tubing, sledding, swimming, watched baseball, and more. Alex’s parents also say he is mechanically inclined to the point of taking everything apart, and does not like to sit around; nevertheless, he is “very well behaved and polite.” He is very social, and knows how to share and take his turn.

Recently, Channel 5 News featured the family in a piece about The Cradle. Bob and Joan have also talked at Cradle seminars for potential families. For Alex’s first birthday party here, Bob and Joan asked for donations to The Cradle Russia Program instead of presents, since the lucky three year old “already has so many toys.”

The family still keeps in touch with the nurses at the hospital in Pskov. “It wasn’t like we just went, got our children, and left,” said Joan about their time there, “the staff that we worked with told us we were like family to them.” One of them took time off to see them depart from the train station and to bid goodbye to Alex, saying “until we meet again” in Russian. Indeed, Bob and Joan hope to return to Russia one day.