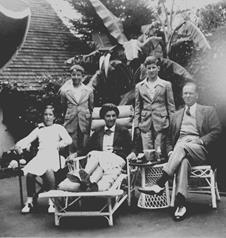 The Cradle was only five years old when Alice Cestari was placed with her family in 1928. More than 30 years later, she returned with her husband to adopt their first Cradle baby. Today, at 88, Alice is healthy and active and enjoys sharing her family’s history.

Alice’s parents, George F. Piper, Jr. and Nina Sturgis Lawler, married in 1910. While living in Wayzata, Minnesota, a “bedroom community” of Minneapolis on the shores of Lake Minnetonka, they adopted and raised three children from The Cradle, George III, Edmund and Alice. The Piper children remember fondly the years at the lake house prior to moving to Pasadena, CA. Their father was president of the Minneapolis/St. Paul Stock Exchange and his family founded Piper Jaffray, an investment banking firm still operating. George Jr. died in 1965 and Nina in 1969.

Edmund went to Yale Medical School, became a dermatologist and married a nurse. The couple lived in Honolulu for several years on naval duty and had two children, then settled in Portsmouth, NH and had three more children. Brother George, a graduate of Stanford University, was Alice’s lifelong best friend. He lived in Wayzata and was an avid historian and antique collector. Both brothers are deceased and Alice remains in contact with her nieces and nephews. George passed away just three months after Alice’s dear husband in 1996.

After completing college in 1950, Alice went abroad with three other girls. In Venice, she met Vincenzo Cestari, who was an officer in the Italian Navy. “Vince was a dream,” Alice says wistfully. When she returned to the States, the two corresponded and fell in love. Alice returned to Italy with her parents, so that they could meet the Cestari family, and she and Vince became engaged. They married in Pasadena in 1953 and Vince received a Master’s degree in Electrical Engineering at California Institute of Technology. The couple then moved to Boston, where Vince got another Master’s degree in Finance from Harvard Business School. Alice was briefly a teacher before becoming a secretary in Harvard’s alumni office.

“It was my 30th birthday,” Alice recalls, “and I decided to give myself a present and call The Cradle. We had applied many months prior. The woman I talked to asked if we had a permanent address, since we had moved several times when Vince was in school. I assured her we would have a permanent address very soon. We went out and found a house in Wellesley, Massachusetts right away, and not long after, we got our first of two Cradle babies, Peter. Luisa came along a few years later.”

The Cestaris raised their children in Wellesley, where Alice still lives. Peter, who works in trucking, lives in Greensburg, PA with his wife and is parenting one child. Luisa lives near her mom in Sherborn, Massachusetts and is an investment real estate agent with three children including 17-year-old twin boys.

“Were it not for The Cradle, I would not have had my brothers, my parents or my children,” Alice affirms. “The Cradle is a big part of my life story and I am forever grateful!”