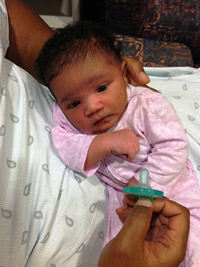 When Angela and Jason Taylor decided to adopt, they already had some insight into the process. Angela was an adopted person herself, placed in 1970, but as was typical at the time her adoption had been a closed one. She has never met her birth family. The Taylors were impressed by The Cradle – especially the emphasis on education – but had doubts about openness.

“One of our big concerns was how the relationship with the birth parents works,” Angela said. “Would they be visiting us or our child? We didn’t know any adoptive families who were in an open relationship, so we didn’t know what that means.”

As the couple started to learn more, they grew more comfortable and began to appreciate the merits of an open relationship. But it was in the required introductory class, “Adoption 101,” where they truly saw the power of an open adoption in action.

“Adoption 101 is a class where prospective adoptive families get to meet a family who are living in an open adoption,” says Phyllis Laughlin, Clinical Director of Adoptive Parent Services at The Cradle. “For most of our families, it is very powerful to actually meet a birth mom, to hear from adoptive parents who have embraced openness, and to see how the children are very clear about who their parents are and what role their birth parents play in their lives – to see how beautifully it can work out.”

“It was amazing to me,” Jason observed, “that every time the child would say ‘Mom,’ she was directly talking to her adoptive mother. That, to me, was the game changer. I said, ‘OK,’ this open adoption thing really works.”

That class also showed the Taylors that there wouldn’t be any missing pieces for their child, like there were for Angela. They completed their home study and felt ready to become parents.

But then came the wait, which is always a challenging time for hopeful adopting families.

“We were actually at our lowest point when we got the news,” Angela recalls. After months of taking classes and preparing their home, the worry and stress were building, and after two phone calls from their counselor telling them they hadn’t been picked, they started to feel like it wasn’t going to happen.

Jason received the call from The Cradle first. After hanging up, he immediately picked up the phone again and dialed his wife at work. He used a sad voice though, knowing that after their previous disappointments, Angela would be expecting it.

“We got the call, we were one of six, and we were chosen,” he told his wife in a gloomy tone. It took Angela a moment to process his actual words. Then she exclaimed, “What?! What do you mean they picked us?!” After hanging up, she went into the storage closet, closed the door and did a little happy dance in celebration. As Jason says, “You’re just excited. It’s beyond words.”

The baby girl, who the Taylors decided to name Jordan, spent 2 ½ weeks in The Cradle Nursery before going home with them. Angela considers the Nursery an extremely valuable resource. “When people give birth and leave the hospital, everyone says you don’t get an instruction manual,” she remarked. “But before we took Jordan home we were able to sit down with a nurse who told us, ‘Here are her records, her feeding schedule and bathroom habits. She likes her swing, her bath and the mirror in her crib.’”

After bringing Jordan home, the first-time parents still had a number of questions so they called the Nursery. Angela found that staff members were always happy to talk to them and offer helpful advice. “I think the fact that Jordan got such excellent, loving care the first couple weeks of her life has helped her have a secure attachment, a secure personality,” she said.

Angela and Jason arranged their first meeting with Jordan’s birth mom when the baby was three months old. It went well, and they agreed going forward to meet 3-4 times a year, with text and photo updates in between. Every month since the day Jordan was born, her birth mother has sent the Taylors a text saying, “Thinking of you. I love her. Happy two month birthday, happy three month birthday, etc.”

Jordan Taylor turned one on August 2, 2013 and celebrated her gotcha day on August 22nd. Angela and Jason have reveled in watching their daughter grow and change. “As a man, you want to be tough,” Jason said, “but when she wakes up and looks at you and gives you that big smile, you melt like butter. It gives me a sense of joy that’s hard to describe.”

Angela delights in seeing Jordan make new discoveries every day. Until she became a mom, she didn’t know that she could love somebody so much – a feeling she describes as “amazing love.” Adoption, Angela says, “is the best thing I’ve done.”