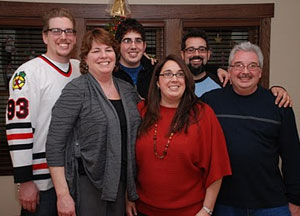 Let me start at the beginning. My beginning, I mean. I was five weeks old in November of 1977 when my parents adopted me from an agency in Evanston, Illinois called The Cradle. Mom and Dad talk fondly of getting “The Call” and rushing to pick me up. Glad that they didn’t think that I was a Halloween prank, seeing as they got the call on Halloween!

People always ask me if I remember a moment when my parents told me about being adopted but I don’t have a specific memory. I have always known that I was born to another family but adopted and raised in the Runkle household. What a truly amazing feeling to know that my parents desperately wanted a child and I was chosen both by them and by God to be in their family. I had a wonderful childhood and was spoiled rotten, getting nearly everything that I wanted, save for a Barbie pool, but that’s another story altogether. I had every advantage and was so grateful that my birth mother had been so unselfish in allowing another family to raise me.

Fast forward to October 29, 2010. I was sitting in a fantastic little Italian restaurant called Mama Mia’s with my Dad enjoying lasagna for lunch when my phone rang. I was expecting a call from my endocrinologist, so even though I was in the middle of the restaurant, I answered the call. It turned out to be Nina from The Cradle. I don’t remember every portion of the conversation but I do remember her asking me if I was somewhere where I could talk. I probably should have called her back but I didn’t. Her call intrigued me and I wondered what was up.

She began by saying, “We’ve had a match on the mutual consent registry.” (So you don’t feel left out, here’s a brief description of the registry: Both the state of Illinois and The Cradle have a database where you can submit your name and contact information. If both the adopted child and the birth parent(s) register, the agency will put the parties in touch). So, my first thought was that my birth mother was searching for me. Then, Nina says, “Well, it’s actually a very unique and interesting situation.”

She was speaking slowly so my first reaction was to think the worst, that someone had died or that someone was in jail. However, as Nina continued, she revealed to me that my birth mother, who was barely 16 when I was born, and my birth father had gotten married. And, to make the news all the more interesting, she told me that Debbie and Ed, their names(!), had three sons. These boys are my biological brothers. Nina kept asking me if I was ok, if I had anything that I wanted to tell the family, and if it was ok for her to send me a letter that Debbie had written. I was in a bit of shock so I agreed to let her send me the letter and thanked her for the call. WOW! Now that was some information to absorb.

After receiving the letter, I found out more about the family. The boys had names! Robert, Jeff, and Thom. Nice classic names! Fast forward a little bit and we began corresponding by e-mail. I got e-mails from Ed and Debbie and I also got e-mails from the boys. I learned so much about them in the first few weeks, it was overwhelming and exciting.
So, instead of being patient, I decided that we better make a trip to Chicago, where (most) of the Lorenty (that’s their last name!) clan call home. Peter and I made flight arrangements and begged his parents to watch the kids for a few days.

Can I just stop for a minute and let you know how blessed I feel to have a wonderful father who has been so supportive of me conversing with and meeting my birth family? I know that his life partner, my mom, isn’t here to bounce his feelings off of, something that must be unbearably difficult, and yet, he is positive and encouraging of my new friendship with the Lorenty family. There truly is a God who listens and helps us through when we can’t do it ourselves.

Fast forward, again, to December 29th, 2010. We’re off to Chicago! I’m nervous and excited! I hope they like me. Friends on Facebook assure me that the family will love me but I still feel apprehensive. It turns out, that I had nothing to fear. The family Lorenty is so welcoming and loving, I felt like a long lost friend. The boys and I get along very well and continue to talk on the phone and share photos of our children and dinner plates; the whole family appreciates a good meal and they all like to cook! It’s so very interesting to find out what we have in common and what things I may have learned from growing up with Mom and Dad.

It’s the beginning a great friendship!

If you’d like to learn more about Anne or chat with her about your own adoption experience, she would love to hear from you. Visit her Blog