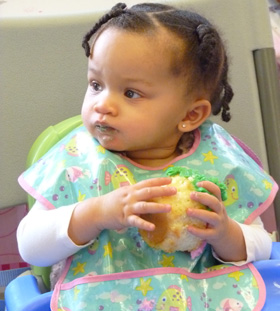 Arryn Jolie Barton turned one on January 3rd. Since it was a Tuesday, her parents had a small celebration at home for just the three of them. Four days later – Saturday the 7th – there was a big party for Arryn with friends and family. It also happened to be her “gotcha” day, the first anniversary of the day she came home from The Cradle with her mom and dad.

The path Amy and Darren Barton traveled from being a couple to a family started years before. When medical interventions failed to help them conceive a child, they decided to pursue adoption. A close friend of theirs, an adult adoptee, shared her insights as an adopted person. Amy knew of The Cradle through her sorority, Alpha Kappa Alpha, which presents its annual Monarch Awards to notable African American men. Gale Sayers was one of the group’s first honorees.

The Bartons attended a Sayers Center information meeting in the summer of 2008, at the South Side YMCA, and completed their Cradle classes by November 2009. A week before Thanksgiving 2010 they received a call that their profile had been selected. But that birthmother chose another family. Very quickly they received another call about a potential match, and a meeting was set up for December 21.

Darren recalls what a positive experience it was: “We hit it off quickly. It wasn’t too long into the first match meeting that it felt like instant chemistry.” The birthmom, who was in her ninth month of pregnancy, was told by her ultrasound technician that she would be having a boy.

A second match meeting took place on December 28, and six days later the baby arrived. “We got a phone call at midnight on January 3rd from the birthmom saying that she had gone into labor and would keep us posted,” Amy said. “Then Arryn was here – and she was a girl!”

Amy and Darren first saw their new daughter at the hospital on January 4th, in the room with her birthmom. “We went in quietly,” Amy said, “and gave the birthmother hugs and kisses and congratulations. The first thing she said was, ‘Go ahead and hold her!’ It was love at first sight.”

Darren was a little leery about holding such a tiny baby, but when he settled into the glider chair, and Amy put Arryn into his arms, she nestled against him immediately.

Her name was chosen very carefully. “We researched names so that we could make it something meaningful for us,” Darren explained, “and what she meant to us.” Having originally picked out boy names, they sat down and came up with two girl names to present to the birthmom. She preferred “Arryn,” which not only incorporates parts of “Amy” and “Darren,” but also means “enlightened.” Arryn’s middle name, Jolie, was inspired by a wonderful trip the couple took to France in 2010. “Beautiful light” is how they view their daughter.

Arryn left the hospital and came to The Cradle Nursery for a couple days, until the surrender papers were signed. Amy and Darren visited her both nights that she was here, feeding her, rocking her and spending hours just watching her. On the evening of Friday, January 7th, they bundled her up for the trek home to Chicago’s far south side – in a snowstorm! “I was sitting in the backseat with Arryn and people were texting and calling us like you wouldn’t believe,” Amy said. “It was a long two-hour drive, but a good two-hour drive.”

And what has life been like for the Barton family since that snowy evening one year ago? “Everything is better,” Darren declared. Arryn is a highly affectionate child who laughs a lot. “She was very fussy when she was little,” said Amy, “but has made up for all that fussing tenfold with how much she laughs now.” She’s also a fast crawler who will travel from one end of the room to the other in seconds, laughing along the way. And while she hasn’t yet taken her first steps, she likes to “cruise” the furniture – and the family cat (who fortunately is quite patient with her).

Arryn’s first outing to a restaurant was on Mother’s Day last year, and she started going on play dates that same month. Now, her “social calendar” is filled every weekend. According to her mom, Arryn eats “everything under the sun” and especially loves fruit. At last month’s Winter Wonderfest at Navy Pier, Arryn entertained her parents by talking and laughing through dinner – despite the fact that it was well past her bedtime.

After a few months of sending letters and pictures to Arryn’s birthmom, and having one meeting, communications have fallen off. Amy and Darren are hopeful, however, that at some point she will reestablish contact. In the meantime, they will continue to revel in the light of their beautiful daughter.