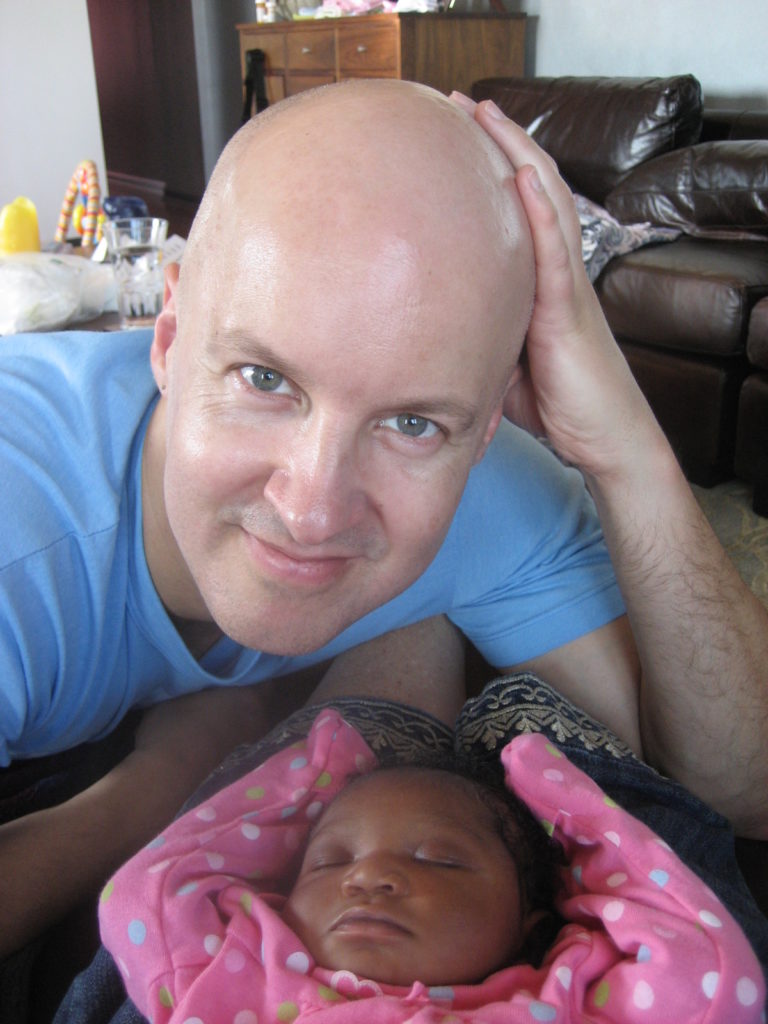 Published October 2014
By The Cradle Staff

To Daniel Vangen, it was only natural that he would become a parent one day, even if it meant being a single father. Fate seemed to have a hand in leading him to The Cradle.

Dan was living in southern California and had no direct ties to Chicago. On his drive home one day, he was flipping through the radio channels and tuned to NPR just as the reporter was discussing anti-gay parenting laws in the southern states – a subject that angered Dan. He kept listening. At the end of the program there was an interview with Cradle President Julie Tye, who talked about The Cradle’s success in working with gay and lesbian adoptive parents. That was an “aha” moment for Dan. He rummaged for a piece of paper in the car and immediately jotted down The Cradle’s web address.

What he had heard on the radio, by chance, and then learned on his own inspired Dan to make a life-changing decision.

A recently Certified Registered Nurse Anesthetist, Dan had been interviewing for nursing jobs in cities on the east coast. But after hearing the NPR piece and researching The Cradle, he decided to move to Chicago and pursue adoption. After interviewing at a number of hospitals in the city he secured a position, packed up his belongings and made the move.

“I bought my condo in Chicago in June of 2007 and took my first step in the door of The Cradle in September of that year,” Dan said.

The adoption process wasn’t easy for him, however. His Cradle counselor warned him of the potential difficulties, especially as a single gay man, but he told himself, “Keep going, march forward, and don’t feel discouraged.” It was his dream to become a father, so he stuck with the process. In the required classes that he took at The Cradle, Dan was the only single parent. That was difficult, too, but the other prospective parents made him feel very welcome.

“One gentleman came up to me and said, ‘I admire your courage,’” Dan recalls. “I didn’t think I was courageous – I was just showing up like everyone else. It was really nice.”

Dan was considered four times by birth mothers before he was chosen to be Isabella’s adoptive dad. Soon after getting the good news, he met Isabella’s birth mother. Not long after that meeting, and earlier than expected, he got another call from his counselor. It was July 15, 2009.

“Do you have a car seat?” she asked. “Your baby’s going to be born tonight. You’d better get a car seat.”

“I freaked out,” Dan vividly remembers. “And then I went shopping.”

The next day, he met his new baby daughter, and the day after he brought her home.

“It was rush hour when we left the hospital. I put Isabella in her new car seat in the backseat and prayed the whole two-and-a-half-hour drive home, ‘Please don’t cry, please don’t cry!’”

When they finally got home, Dan and Isabella were eagerly greeted by a small group who had gathered at the condo: friends of Dan who had brought Chinese takeout; a woman Dan had befriended in a Cradle class; and Dan’s mother, right, who was absolutely thrilled to meet her new granddaughter.

“We all sat around admiring Isabella the whole evening,” Dan recounts with pride. “It was such an incredible day.”

But that joy quickly turned to sorrow. Just eight weeks later, Dan’s mom, who had been bravely battling lymphoma, passed away. “She was my biggest support system,” he says. “It was a shock.”

It was also the start of a difficult period for the new father.

“I was trying to mourn my mother and deal with the responsibility of caring for an infant,” Dan explains. “There were times when I felt like I wasn’t able to enjoy being a parent as much as I wanted to.”

Over time, that changed, and Dan allowed himself to revel in fatherhood.

He and Isabella moved to Seattle in August 2012, when Isabella was three. This past July 15th she celebrated her fifth birthday. Dan describes Isabella as sweet, sassy, tenacious, articulate beyond her years and very, very active! He takes her to ballet, swimming and Sunday school.

“I have a healthy, smart, loving, vivacious daughter, and although her vivaciousness is often a challenge, I know I am a lucky father,” Dan says. He also appreciates what he’s learned from raising an African American child and being a transracial family. Isabella, Dan says, has opened his eyes to how the world looks to people who are different than you.

He is thankful to The Cradle and the Sayers Center program for the excellent preparation he received. He has also made sure that Isabella has African American women in her life – women from his work, church and the neighborhood who provide invaluable support to both of them. He has even become adept at doing Isabella’s hair!

“Isabella is 110% my heart, my soul and my daughter,” Dan says. “I know what goes on in her mind; she knows what is going on in mine. I can read her facial expressions, and she can read mine. I could not feel more of a connection to her if she were my own blood.”

And Dan is looking forward to all of Isabella’s milestones to come.

“I’m really excited to see her as she develops. She is being raised in a non-conventional American household, but with all the support and love in the world. It has been and will continue to be an interesting journey for the both of us.”