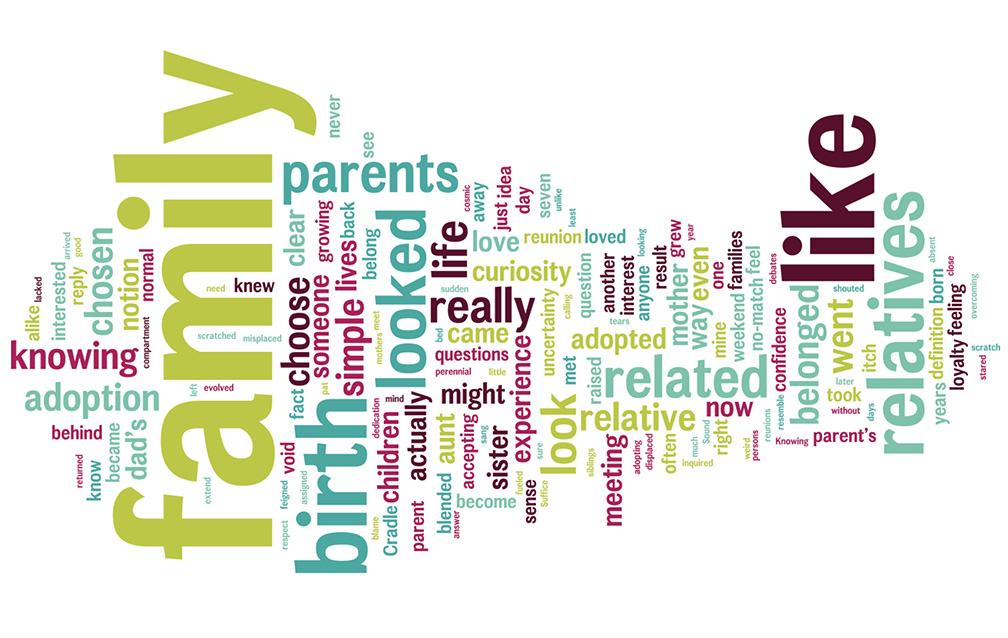 All things are relative…. or so the saying goes. A good friend, whose children call me aunt, once said to me “there is the family we are born to and the family we choose – we choose you”. Not uncommon is the notion of adopting friends and calling them family, but when you actually are a person who was adopted, the idea of being chosen is even more special.

From as far back as I can remember, I knew I was chosen. My parents chose to have children and went through a mountain of processes and paperwork to form their family and become parents. The same was true for my sister who came before me. Both children of The Cradle, we were chosen, and a family we became. Growing up, we met our relatives, went to family reunions, loved and bickered, laughed and cried, sang and shouted and so on and so on, just like any other family. All the while knowing that adoption was the event that made us a family but wasn’t something to leverage love against, blame for injustice, create cause for uncertainty, provide reason to be the same or different, or any other emotion and notion that can, at times, be associated with adoption. We were just a normal family, warts and all.

As life evolved, our parents continually affirmed their love and dedication all the while assuring us that we did indeed belong. The fact that we were adopted simply meant that our birth mothers were unable to parent us, not that we were unwanted or unloved. As a result of this simple and clear assertion, my sister and I grew up with a curiosity about our birth mothers/families without the pain of feeling an itch we couldn’t scratch or a void we couldn’t fill. We knew where we belonged and didn’t feel displaced or misplaced. Well, no more than any normal teenager who is sure that they were dropped into the wrong family by some cosmic mistake. Then again, don’t most teens feel that way at some point?

There was a certain comfort in the wholeness of it all and despite the parent/child disputes and debates that come with growing up, we were chosen and loved from the moment we became a family. Not all kids have this sense even if they were raised by their birth parents; we had a leg up on the world.

Then one day in our perfectly-not-so-perfect-normal lives, a realization came while attending a routine family reunion. Looking around the room, I realized all my dad’s relatives really did look alike, sound alike and had a whole host of similarities that my little nuclear family lacked. In a slow growing sense of clarity, I came to the simple and undeniable decision that these were my dad’s ‘people’, his relatives, not mine. The one clear fact of adoption is that resembling someone in your family is mere chance. Although we were all the same race, by some luck of the draw, our individual heights, weights and silhouettes clearly marked us as a blended family of adoption. So during this simple family reunion, a not so simple question took root… if these were my dad’s relatives, who were mine?

The ‘who do I look like’ query is a common denominator of adopted persons. Knowing who you look like gives that extra boost of feeling like you belong more than if you don’t resemble anyone in your family. Despite my parent’s confidence and unwavering certainty of where I belonged, I couldn’t help longing to know who I looked like. This interest was fueled by the never ending questions but well meaning passersby who often inquired “does she look like your husband’s side of the family?”. My mom’s pat answer was “no, she looks like herself”. Sound and reassuring definitely, but a hair behind the eight ball planting a sliver of uncertainty into the garden of my life experience. As a result, I grew up quite interested in who I looked like even more than to whom I was related. The notion of love, loyalty and respect weighed heavy in accepting my parent’s affirmations. They raised me for better or worse and earned the right to be top in mind and heart. Being too interested in searching for birth families seemed an affront to my family. Yet somewhere along the way the curiosity factor never really went dormant for long.

Years after overcoming the divide between loyalty to home and hearth and acknowledging my own ‘relative’ curiosities, I registered with The Cradle to see if I might be matched with a birth parent. With a no-match reply, I tucked away the curiosity back into its assigned compartment, went on with my life, met the man of my dreams and married. I no longer wondered where I belonged or cared about whom I looked like and instead planted my hopes on being able to start my own genetic family so some day I might see who I really looked like. So much for the feigned childhood confidence of knowing where I belonged; I found myself accepting that there was more of a void than I ever wanted to admit.

Just when I thought the look-alike and relative questions of my birth were behind me, a letter arrived informing me that the ‘no-match’ reply from years earlier was a clerical error and someone was actually looking for me. Someone who I might actually look like and was, by all basic definition, related to… my birth mother.

We talked on the phone, exchanged a few photos and emailed. The story of my birth was not pretty, steeped in the secrecy during an era of propriety and filled with relatives holding a wide variety of interest in my presence on earth. Finally, seven years later, we scratched a seven year itch and planned to meet face-to- face. The experience of meeting someone halfway through your life that puts to bed the perennial ‘look-a-like’ question once and for all was to say the least… weird.

She stared at me a lot, as did her sister, my aunt. An aunt, now there was another big idea to absorb since neither of my parents had siblings. Aunts were as absent in my life as knowing who I looked like. All of a sudden, in a split second meeting, I had relatives, who I looked like.

The first meeting took place over a period of days where my birth mother and I were often labeled Mother-Daughter; another alien experience after decades of remarks about how unlike anyone I looked. At the close of the weekend we returned to our lives with no clear plan on how or where to go next. Unsure if this new circle should extend to either of our families, we left the weekend knowing we were in some way related. For now, we didn’t need any more of a definition than did my friend’s son while picking relatives to read prayers at his Bar Mitzvah. After his mom explained that we were not sisters or brothers to his parents he called us right away to say “I didn’t know we weren’t really related!” Suffice it to say, related or not, we proudly accepted our spot on the bema with his other relatives and shed the same tears of pride as did his ‘real’ aunts and uncles.

So it really is ‘relative’ after all! There is the family to whom we are born and the family we choose. My birth mother and I now get to choose how we want to be related and time will tell how blended our lives become.