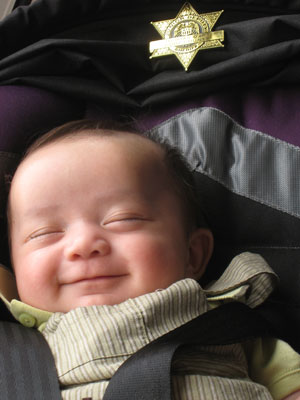 When Patricia and Kenneth C. Crannell, Sr. started exploring adoption in their home state of Massachusetts, more than four decades ago, it didn’t go so well for them. “My dad had polio,” explained their son, Kenneth “Chuck” Crannell, Jr., “which back in the sixties made for an interesting adoption situation. My parents were concerned that adoption agencies wouldn’t look beyond my dad’s handicap, and that proved to be true of some.”

Ken, a professor of speech at Emerson College in Boston, got accepted into a Ph.D. program at Northwestern University, and he and Pat moved to Evanston. The couple soon learned about The Cradle, although as they told Chuck years later, they were overwhelmed the first time they drove by this “imposing stone mansion.” Their fears quickly dissipated. The Cradle looked beyond Ken’s disability to see what kind of a father he would be, and accepted his and Pat’s application. “They filed their paperwork and nine months later, on November 28, 1964, they got me,” said Chuck. In July 1967 Chuck’s parents adopted his sister, Tracy, through The Cradle, and the family returned to the east coast.

Chuck has known his wife, Martha, since they were kids. Even before they were engaged they started talking about having kids of their own one day. When they were unable to conceive a child, and fertility treatments failed, they shifted their focus to adoption, without hesitation. “Adoption was always at the forefront of our thoughts about family, right from the start,” Martha affirmed. “Chuck and I agreed that there are different routes to building a family. We said, let’s do it!”

Although The Cradle is licensed to complete adoptions in Illinois, and the Crannells live in Massachusetts, an exception was made because Chuck is a Cradle adoptee. He and Martha completed their home study in May 2008, took online courses through Adoption Learning Partners, and traveled to Evanston in August 2008 to participate in the required, all-day “Adoption 101” class. That November, just before Martha’s 20th high school reunion, they went on the waiting list. “It was the big news at the reunion,” she recalls.

Like the Fellinghams and the Bellinis, Martha and Chuck waited a long time until they were matched with their son. For nearly three years, “it was up and down, a rollercoaster,” as Chuck describes the wait. Their profile was pulled six times, but unlike Cradle families who were local, they couldn’t easily arrange to meet with the birthparents. They did, however, make it clear in their profile that they would be willing to return to the Chicago area yearly to visit with the birth family.

Seven was the lucky number. When Martha and Chuck got the call from The Cradle that they had been selected by the birthparents of a baby boy, they had only a week to make arrangements and fly to Chicago. Baby “Jonathan” had already been born and was staying in the Nursery. Martha and Chuck decided to name him Kenneth Jonathan Crannell and call him Casey, from his initials K.C.

At the entrustment ceremony, where they met the birthparents for the first time, Martha and Chuck discovered some of the reasons why they had been chosen. “They think Chicago can be a scary place, and thought that our home looked like a safe environment to raise a little guy,” Martha said. “We also mentioned that we loved to travel and would be taking him places,” Chuck added. The couple enjoys hiking and camping and plans to foster the same love of the outdoors in their son. The fourth member of the family, a great big fuzzy cat named Seuss, “adopted” Martha and Chuck a few years ago.

The fact that Chuck was adopted through The Cradle helped solidify the birthparents’ decision. “The birth mom really liked the fact that we will be able to talk to Casey about what it’s like to be adopted,” Martha observed. “She said to us, ‘you’re really going to understand.’”

“They met me and said, ‘oh, he’s normal,’” Chuck said with a laugh. “When questions come up for Casey,” he continued on a more serious note, “it will be easier to answer him, because he’ll know that Daddy is adopted, too.

Casey’s placement day was June 16th, and Martha and Chuck stayed in Chicago for another week until all the necessary court papers were filed. At the time of this writing, Casey’s extended family in Massachusetts had not yet met him in person.

But there was Skype, e-mail and the phone. “We talked to my parents on the cell phone and Casey was in one of his fun little moods, babbling,” said Chuck. “I just held the phone up to him for them to hear. Then we got the video chat going, and they were both glued to the screen.” “They are ridiculously happy,” Martha chimed in. Aunt Tracy is very excited, too, as are her two daughters. Casey is the first grandson for the senior Crannells and the first grandchild on Martha’s side.

How does Chuck envision the future for his Cradle baby? With a grandfather who is a specialist in Robert Frost, and a dad who is an engineer, he simply hopes that Casey will go “wherever his passion takes him.”