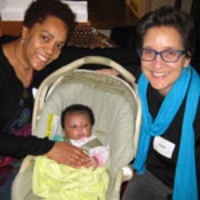 DePaul University professors Francesca Royster and Ann Russo had a great life together, fulfilling careers and a busy schedule. But something was missing. “We decided that we really wanted to raise and nurture a child,” Fran said, “build a home for them and shepherd them through the world.”

They started talking to their friends – and even to Fran’s doctor – about adoption, and The Cradle kept coming up. A number of their friends had adopted through The Cradle and one friend had placed her child for adoption through the agency.

“We liked the philosophy of openness, the empathy and respect for birth moms, which seemed to be missing in a lot of other situations and agencies,” said Fran. “It’s not just about us,” Ann added. “It’s about the baby. It’s about the birth parents. Honoring and appreciation of everybody involved… it’s about all of us, and we loved that. It brought us closer to The Cradle.”

After submitting their application in April 2011, Fran and Ann went through the home study process and took the required pre-adoption classes. “The thoughtfulness of the process was amazing,” Ann observed. “It made me think deeply about what it means to adopt a child, to raise that child, and to try to be in a relationship with the birth mom and her family. It provided a space for us, too, even though we’ve known each other twelve years, to get to know each other – our own family issues.”

The couple prepared their profile and waited to be presented. They were anxious that they might not be picked. “Being older and being two women, we were really worried that the odds were stacked against us,” said Fran. “In fact, we were kind of shocked that things went so smoothly.”

While they were not selected by the first birth mother who reviewed their profile, it wasn’t long before they received news that a baby girl had been born and that her birth mother was considering them as adoptive parents.

She needed time, however, to make such a life-changing decision, so the baby stayed in The Cradle Nursery for about a month after she was born. “It was very important to us that the birth mother have her space to make up her mind,” Fran said. “So we kept her in our thoughts and sent positive energy her way.”

During that time they also had the chance to visit the baby in the Nursery, and found themselves growing attached. When the birth mom ultimately decided to sign the surrender papers on a Monday morning at 10 a.m., and Fran and Ann received a call from their counselor instructing them to pick up the baby at 3 p.m., it was an exciting but “surreal” moment for the couple. On May 7, 2012, Cecelia (“Cece”) became their daughter.

While Ann and Fran haven’t met Cece’s birth mom, they are hopeful that one day she will get to know them and be part of their daughter’s life. They fully understand how difficult it was for her to make an adoption plan, and that she just isn’t ready for contact.

For now, they are reveling in motherhood and their beautiful “bundle of joy.”

“I love the idea of miracles because she’s definitely a miracle,” Ann gushed. She and Fran delight in seeing Cece wake up each day with a smile on her face and make new discoveries. They describe their daughter as determined, energetic and focused. Fran feels that even before they met Cecelia, she was exactly the child they always wanted.

“What we’re hoping for her is to be able to make her way through the world and just blossom. We feel like that’s our mission – to provide the space and support she needs to be the person she really is.”