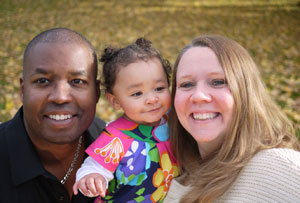 Published November 2011
By The Cradle Staff

How did you end up adopting through The Cradle?

Lenell: It was a discovery process. We considered three different agencies and sat in on a seminar at one that wasn’t for us. The Cradle was the second place we looked at. After attending the first meeting, we loved it.

How long did you wait before you were chosen?

Bonnie: From the time we walked in the door it was a year and 3 months, but only about 5 months from the time we went on the waiting list. It was our second call. Our profile had been presented once before but the birthmother picked another family. So this was our second time getting a phone call from The Cradle. It was kind of unique because we were the only ones chosen by this birthmother – she didn’t want to look at any other profiles.

Lenell: We told her that we were flattered and asked why she chose us. She said that she had gone on the website and looked at profiles, and she liked the fact that we traveled a lot. In our profile we mentioned a Manhattan trip, Cabo San Lucas and Puerto Rico, and friends who live in California and Atlanta that we visit frequently.

Bonnie: She also commented that because we were Sox fans and they (the birth family) were Cubs fans, she thought that would be fun.

Where did you first see Chloe?

Bonnie: We actually got called by the birthmother when she was in labor, and we met her at the hospital. She ended up having an emergency C-section after around two hours. We were watching through a window and the second Chloe came out, the nurse held her up. From that moment it just felt right. The birthmom’s parents were there, too.

How did you pick her name?

Lenell: “Chloe” was one of three finalists. We gave the birthmom the names and she liked Chloe, which was great for us because that was our top pick. So we ended up coming to that conclusion all together.

Chloe spent ten days in The Cradle Nursery before she came home with you. Did you visit her there?

Bonnie: We tried to make it to the Nursery as often as possible. I was there every day except for one when we had a blizzard. I was on my way to The Cradle and Lenell talked me out of going that day, since we’re about a two-hour drive from Evanston. We had such a positive experience with the Nursery and felt such comfort knowing she was in their care.

Lenell: We found that even in the Nursery, Chloe enjoyed diaper changes. If she was just a tiny bit fussy and you laid her down for a diaper change, she was calm as could be, smiling at you. The nurses were terrific.

How have your lives changed since bringing Chloe home, and what is she like?

Bonnie: She is a blessing. It’s so hard to put into words how much things have changed, but they’ve done so in the best way possible. Chloe is an amazing baby. She laughs a lot and doesn’t cry very much. She’s just an all-around happy, playful baby.

Lenell: Our lives have changed 180 degrees. She is everything we imagined.

Have you connected with other Cradle families?

Lenell: In the first class we attended we met another couple and really hit it off. We got together at their house one night and have been friends ever since. We talk to them all the time. They’re still waiting, so we try and encourage them. They do have a 6-yr-old daughter who was adopted and they’re waiting for their second. Through a connection from The Cradle we met another couple at the picnic in Homewood. They seemed really cool and they’re in our area, and we’re going to try to meet up with them as well.

Bonnie: We have had the best experience with The Cradle. The staff is amazing and the classes are very informative. One that stands out for me is the class where we went to see a doctor who told us all about medical risks. It’s amazing that The Cradle provides so much information to prepare you for anything. It makes you feel more comfortable going through it. I didn’t mind the process at all, although we did have the nice long drive to the classes!