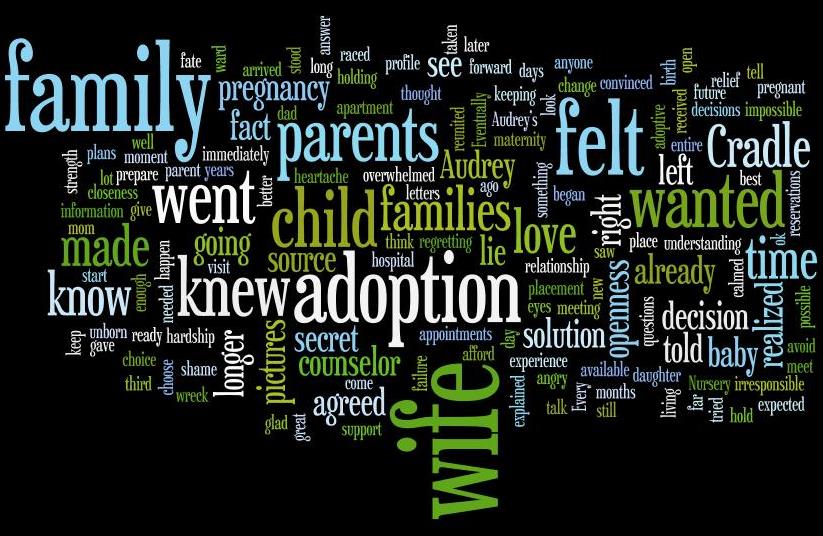 When my wife told me she was pregnant with our third child in three years, I felt overwhelmed, my mind raced to find a solution. I knew that we could not afford to parent this child. Because of a lack of money, we were already living in my parents’ two-bedroom apartment.

We considered abortion as a possible solution so that we could avoid telling our families about it. As the appointments came and went, we knew we made the right decision by not going. Our only choice left was adoption. At first my wife wanted a closed adoption. I felt that the adoption should be open, I wanted to let our baby know that we love her. I needed to know that she was ok. I also wanted to be available to answer her questions before she started asking them. I convinced my wife that openness was best for our daughter and for us.

We both agreed to keep the pregnancy a secret from our families. We didn’t want to give anyone the opportunity to change our minds, and we successfully hid the entire pregnancy. During the last few months, I really tried to distance myself from our unborn child. I knew I had to prepare myself for the heartache to come.

The night my wife gave birth to Audrey, all I could think about was keeping the secret. When I arrived at the hospital, I was a nervous wreck. I felt failure and shame because I was so irresponsible with my decisions. I went up to the maternity ward and immediately felt better being reunited with my wife. I was glad to see she was holding together so well. She was my only source of strength that day.

She explained that The Cradle was contacted and that a counselor was on her way. As we received more information from our counselor, I began to realize that the adoption was going to happen. At the time, I was regretting the fact that we had a baby and didn’t have a plan in place for adoption. Our child went to The Cradle Nursery while we made plans for her future.

Later, I realized that fate had taken over a long time ago. A few days later we went to The Cradle and looked at some letters and pictures from adoptive families. I thought it would be an impossible task to choose a family. But one profile stood out; not because of what they said, but because of their pictures–I could see the love and closeness in their family.

My wife and I agreed to meet Audrey’s new parents. From the moment I saw them, I knew that this was her family. All my reservations left me; they were already parents in my eyes. After the meeting I felt very positive about the placement, but something was still amiss. Eventually we realized that the ongoing lie to our family was the source of our remaining hardship.

I wasn’t ready to tell my family, but my wife couldn’t hold it in any longer. I was very angry with her when she told my mom and dad. When I calmed down enough to talk about it with my parents, they were more understanding than I expected. The fact that I no longer had to lie was a great relief and I could start enjoying the openness that we wanted.

Every time we visit with Audrey and her family, I know we made the right decision. I’ve gained a lot from my experience so far, and look forward to our relationship growing in love and support.