ELENA’S ADOPTION STORY – MOM AND DAUGHTER, BOTH ADOPTED FROM THE CRADLE 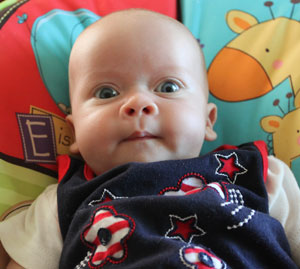 Published July 2011
By The Cradle Staff

When Sarah Borland Bellini was a child, one of her school projects was to make a journal about her family and her dreams for the future. In one of those books she wrote, “When I grow up I’m going to be a golf pro and adopt three children.”

Although she’s not a professional golfer, Sarah still enjoys hitting the links. And on June 6th of this year, she and her husband Alessandro brought their first child, Elena, home from The Cradle.

Like Warren Fellingham, Sarah always knew she was adopted. “Shortly after my parents adopted me,” she said, “my mom got pregnant with my sister and a few years later my brother. I remember her pointing to her stomach and saying, ‘You’re not from here and that I was adopted.’ And I wondered, ‘Where am I from?’ I always thought that I was a child from God, adoption was just part of my plan. ” Dorothy and Bruce Borland saved the letters The Cradle sent them around the time of Sarah’s adoption in 1970, and placed them in her baby book.

Adoption has always felt very natural for Sarah. She and Alessandro knew their family would be created through adoption and they looked at a number of agencies, ultimately choosing The Cradle. “The Cradle felt like a natural choice since I was from there. I was always proud and happy that I was adopted into my family and we wanted to share this connection with our child. I am forever grateful for The Cradle, they have helped me find and become a family,” she said.

The couple started their adoption process four years ago. Initially they looked into adopting internationally, but changed their minds and switched to the domestic program. “The more we thought and learned about open adoption,” Sarah reflected, “the more we liked the idea of knowing the birthparents if we could, and knowing more about our child’s background.” After completing their home study, they waited another 25 months and redid their profile three times until Elena was placed with them. “Each time we revised our profile I felt like it was so much better than the previous – better pictures, less typos and grammar errors not caught before. I was proud and happy that we revised our profile – every time!”

Similar to the Fellinghams’ experience, it was a detail in the adoptive parent profile that struck a chord with one of the birthparents. Sarah and Alessandro wrote about how their dog, a sweet Labrador retriever named Timber, had undergone two knee surgeries. While Timber was recovering, Alessandro would sleep on the couch to be near him. Elena’s birth mom had had a similar operation, and her father slept on the couch to be near her. “So it touched her heart, that story,” Sarah observed. Elena’s birthmother also liked the fact that both Sarah and her mother-in-law were adopted – as she was, too. “At our match meeting we discovered that Elena’s birthmother and I were born in the same hospital.” Out of eight families the birthmother was considering, she selected the Bellinis.

At the suggestion of Cradle counselor Emily Maxwell, Sarah started a blog where she can post pictures of Elena and monthly updates. “That way her birth family can look at pictures, too,” Sarah explained, “and watch her grow up. I will send an email to her birthparents to let them know when I am about to post new pictures. The blog is great because Elena’s birthparents can visit it whenever they want. Our relatives in Italy and around the country love her blog, too.”

Sarah also wants Elena to know about her birthparents. “I just need her to know how much her birthparents loved her and how great they are – for her to feel confident about where she came from, how important that is. We are keeping in touch with emails, the blog, and eventually when her birth mom is ready, visits. We really love her birth family and they are now a part of our family through Elena and in our hearts.”

Dorothy and Bruce absolutely adore Elena, their sixth grandchild and much awaited second granddaughter! When she gets a bit older Elena will have several cousins in the area to play with, two of whom were born six weeks before her.

At just a little over one month, Elena is sleeping well, waking only once during the night. “She’s awesome,” her mom declared. “Our beautiful daughter is a treasure.” Like Sharon and Warren Fellingham, Sarah and Alessandro Bellini are still in a state of awe and disbelief.

“In the end we were totally amazed by the whole experience,” Sarah marvels. “After waiting so long, having a number of ‘calls’ and being selected once before, only to have that situation not work out, there were many times when we said, ‘This is too long,’ but we held it out. It couldn’t have been more perfect – I know that’s what everyone says, but I didn’t believe it until it happened. Our daughter who was meant to be with us is finally here.”