ENORMOUS CHANGES AT THE LAST MINUTE 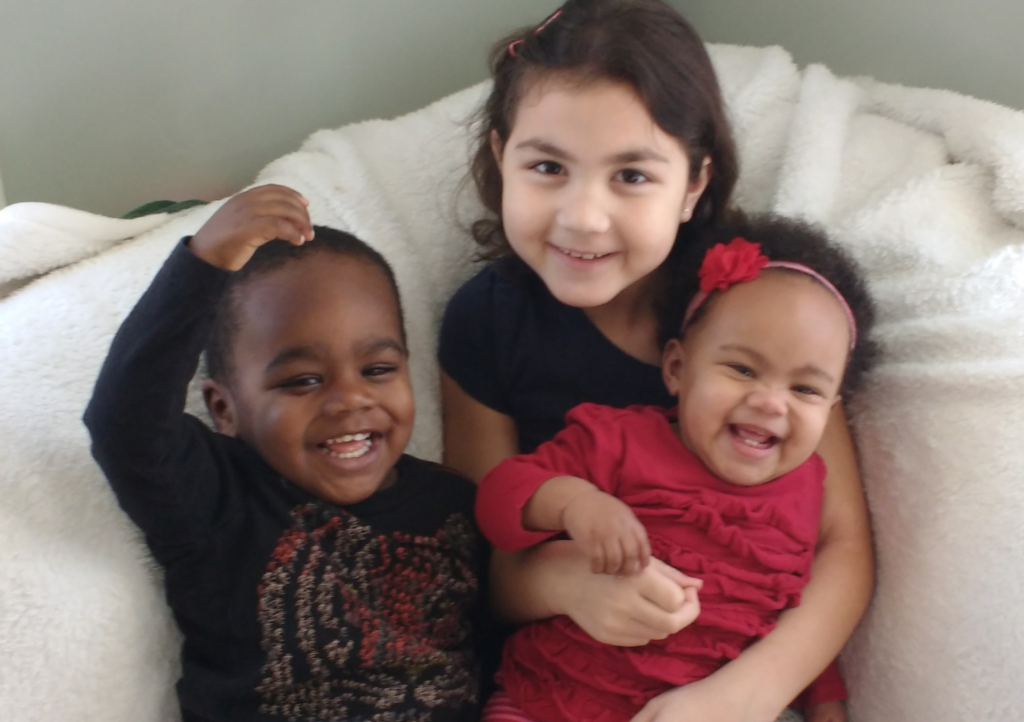 Timing is everything. But as Cradle parents Michele Thoele and Puamuh Ghogomu learned, in adoption it is something that can’t be controlled and is far from perfect.

The couple did have the fortune of good timing by ending up in the same dorm as undergrads at the University of Illinois at Urbana-Champaign. Michele grew up in downstate Springfield, where her parents still live. Puamuh was born in Houston and spent most of his formative years in his father’s native Cameroon, returning to the states at age 16 and settling with his family in Montgomery, Illinois.

Michele and Puamuh married a few years after graduation, and in 2008 their daughter Evie was born. Giving Evie a sibling proved challenging, however, when the couple experienced infertility. Michele had always wanted to adopt, having grown up with adopted cousins and a best friend who had four adopted siblings. “It was just so normal to me,” she recalls. Puamuh had reservations. The concept of legally adopting was foreign to him growing up. “In Cameroon,” he explained, “a child who needed a home would likely be taken in by someone in his or her extended family, including grandparents, aunts, cousins, etc.”

A highly proactive person, Michele did some research and signed them up for the next Sayers Center info meeting on August 31, 2013 (as a multiracial family, they knew they wanted to adopt a black or biracial baby). During the long drive to far south suburban Matteson, she prayed that the presenter would be good. But she also felt strongly that both of them had to be on board 100% to move forward.

Michele wasn’t disappointed. After listening to Nijole Yutkowitz, The Cradle’s VP of Inclusion and Community Development, Puamuh was ready to take the next step. He appreciated that Nijole kept it real, not just focusing on ideal adoption scenarios. They sent in their registration fee that same day and soon began the home study process.

Puamuh affectionately dubbed Michele the “project manager.” While he was at his job as an attorney, she was caring for Evie and navigating the large volume of adoption paperwork. When he came home at night, he would have “assignments” she had left for him on post-it notes. Since they were already parenting a child, some of the work didn’t feel completely relevant. Nonetheless, Michele is thankful for the preparation. “I would remind myself that this is an enormous thing The Cradle is facilitating and it’s on them to make sure it’s done right,” she said. “These kids deserve the best.” She and Puamuh are also thankful for the care and compassion Cradle birth parents receive during the decision-making process.

In May 2014, eight months after applying to The Cradle, they went on the waiting list. The family had recently returned from a trip overseas and just put their house on the market. What they didn’t know is that their son Isaac was already born and in The Cradle Nursery. The call from their counselor, Corinne Ferguson, came as a shock.

The birth mother, who was raising a young son, had chosen them because she felt their relationship was strong and loving, and she liked the fact that Isaac would have a big sister. She was also drawn to a photo in their profile of Puamuh’s father – an African man whose skin color resembled hers and Isaac’s.

Michele and Puamuh had been prepared to wait for a year, not a matter of days. Prospective buyers were traipsing in and out of their home. Puamuh was especially busy at work. The decision facing them was a difficult one, not because of Isaac, who in their view was perfect. It was the timing.

Ultimately, they both realized that he was meant to be their baby. “There is no script for this,” Puamuh remarked. “Once there’s a baby waiting, you don’t get to determine how this will fit in my schedule.”

They were given the go-ahead to visit Isaac on June 18, which happened to be Evie’s birthday. “I got a baby for my birthday!” the 6-year-old proudly announced to the guests at her bowling party. After the party Michele and Puamuh went to The Cradle, where they held and fed Isaac for the first time. Both cried. They stayed for hours and didn’t want to leave. The next day – which was also their 10th wedding anniversary – they were able to bring him home.

A second big surprise came several months later, when Corinne called Michele on a Friday evening and asked to come over. This wasn’t unusual, since the family had become friends with Corinne through Isaac’s adoption and post-placement visits. She sat Michele down and calmly told her that Isaac’s birth mom was pregnant and hoped they would consider adopting this baby, too. Stunned, Michele told Corinne, “You have to stay. You have to tell Puamuh.” He was still at work.

When he got home and heard the news, he was in disbelief. The couple decided they wouldn’t talk about it for the next 24 hours, as each needed time to reflect on their own. They got a babysitter for Evie and Isaac and made dinner reservations. Driving to the restaurant, Michele could no longer remain silent. She already felt that this child was meant to be theirs as well, even though the siblings would only be 11 months apart. Puamuh concurred. “If I learned anything from Isaac, it’s to just say ‘yes.’ I feel that what we went through with him prepared us for Camille.”

Michele and Puamuh had not yet met Isaac’s birth mother in person, and very much wanted to. She agreed, and the meetings went well. She even invited them to be in her hospital room with her when Camille was born. “She’s a very strong woman and very sure of herself,” says Michele. “She really seems at peace with her decision.”

Camille came home on April 6, 2015. Her parents describe her as sweet, easygoing and fearless. She wants to do everything Isaac is doing, even though her big brother is always on the move – a “force of nature” with a big personality and an equally big heart. He is also very protective of Camille. Michele and Puamuh text photos and updates to the children’s birth mom. Evie, nearly 8, is a wonderful big sister, and gets to be like a little kid again with two toddlers in the house.

As Puamuh observed, “There’s no perfect timing for any of this. That’s just how life happens.” And he and Michele couldn’t be any happier with their busy life and three beautiful children.