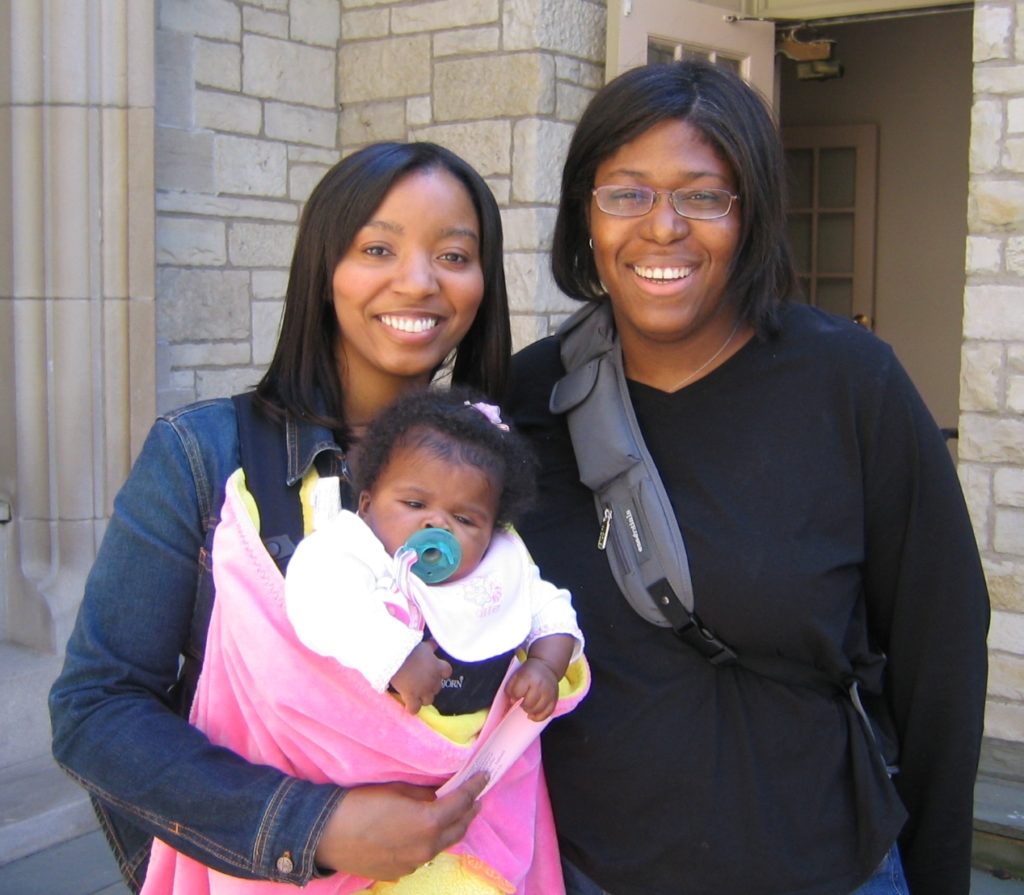 Published March 2014
By The Cradle Staff

The Cradle’s all-day Adoption 101 class was the eye-opener for Janeen and Sydne. “Through the class we learned a lot about the benefits of an open adoption and realized how it was in the best interest of everyone,” Janeen says. There was one exercise in particular that really touched the couple. During a class, everyone was asked to place a personally valuable object in a basket. The basket was passed around, and every person in the room took another’s object and held on to it. Sydne selected a beautiful wedding band with an inscription on it.

As she held the wedding band, Sydne realized she wanted to hold it carefully, to show its owner that she was taking care of it, that it was safe in her care. “You have this ‘ah ha’ moment when you realize that this is adoption,” Sydne recalls. “Someone is going to give us this gift, this wonderful child that is so important to them, and you just want to hold this gift carefully and make sure they know everything is okay.” It was this exercise that changed Janeen and Sydne’s opinions on openness.

After their fair share of waiting, Janeen and Sydne received their first Cradle call saying they had been selected to be adoptive parents. It was Christmas Eve. “Things started to spin!” Sydne says. The couple was incredibly excited, but they also realized there was so much to figure out, to plan for. But once everything was in place, they were going to bring a baby home. Janeen adds, “It still chokes me up to think about it.” Their daughter Kendall hadn’t been born yet, but the couple already loved her.

February 13th of 2006, the day before Valentine’s Day and the day Janeen and Sydne brought their daughter home from The Cradle Nursery, was the coldest day of the year. They had to pile layer after layer on the baby to keep the freezing air out. “It took us an hour because we were almost afraid to touch her. We didn’t want to break her!” Janeen recalls. “The poor counselors were probably thinking: ‘are they ever leaving?!’”

Once they got home, they set Kendall down in the middle of the floor, car seat and all, and just stared at her. “My initial thought was ‘So we’re supposed to know what to do now?’” Sydne says. “It was a whirlwind. It was awesome.” But Janeen and Sydne figured it out, and after a couple of years, they eagerly looked forward to adopting their second child.

Logan was a holiday baby, just like his big sister. The couple received the call about Logan around Thanksgiving of 2009, after he had been born, but the baby stayed in the Nursery until January while his birth mother was making her decision. It was an emotional time for everyone involved, and Janeen and Sydne looked to their Cradle counselor for guidance.

The couple met Logan’s birth mother during the decision-making process. Even though it was difficult for her, Janeen and Sydne were grateful for the chance to form a personal connection. “We realized how awesome she was, really smart and really spunky,” says Sydne. “And to see the way she looked at Logan, it was phenomenal.” Logan’s birth mom and Sydne shared a love of cooking, and they learned they had both made Cornish hens instead of turkey for their families that Thanksgiving.

This moment of connection, though simple, was an important one that Sydne can share with Logan when he gets older. While Janeen and Sydne do not currently have contact with Kendall’s or Logan’s birth family members, they are hopeful that open relationships will develop in the future with the help and guidance of The Cradle.

Meanwhile, they are thrilled to be parents to two wonderful children.

“You feel like your heart will explode it’s so full, so big, and so in love with these babies,” says Sydne. Today, Janeen and Sydne are experiencing so many new things with Kendall, who is 8, and Logan, who is 4. Kendall is a natural athlete, able to do any gymnastics move or run any football pattern, and Logan is a thinker who loves to read and ask questions. Music is also important in their home, and dance parties incorporate both Kendall’s pop diva taste and Logan’s funkier music preferences.

Just as they learn more about their children daily, Janeen and Sydne agree that by working with The Cradle they learned more about each other through the adoption process. And as they worked together, they had the continued support of their counselor who encouraged them through every step. “We feel like we worked with an agency that was the right agency for us. The Cradle supported us in a way that we needed, whether that was administratively or emotionally,” Sydne explains. They embraced the process because, as Sydne says, “These are the children that were supposed to come home and be our kids. Everyone’s baby is out there.”

Sydne also recently joined The Cradle board. “As a Cradle adoptive parent, I of course have very warm ties to the organization,” she says. “An honest and ethical approach is what I believe The Cradle brings to the adoption process, and I believe those traits should be nurtured and protected.” Sydne is thrilled to find new ways to support adoption, a cause she is passionate about.