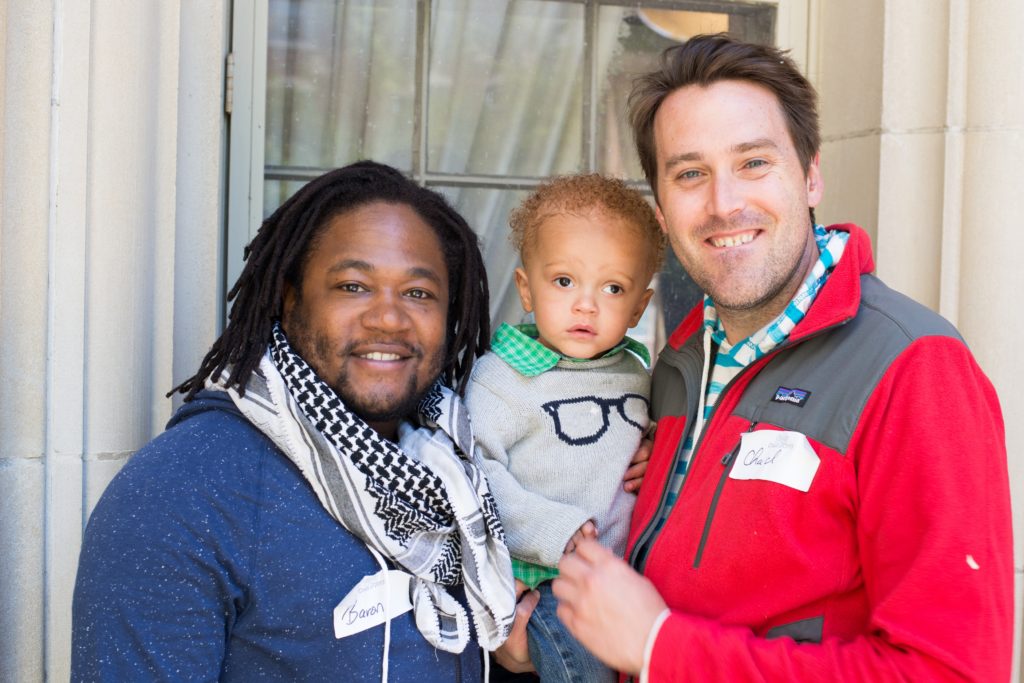 Published June 2014
By The Cradle Staff

When Baron Clay and Chad Weiden met 10 years ago, one of the reasons they first connected and bonded so quickly was their shared desire to have children. Seven years later, they decided that it was time to start their family. Chad and Baron chose The Cradle because, as Chad says, “We wanted to partner with an adoption agency that not only believed in open adoption, but also supported LGBT families like us. The Cradle was the obvious decision because they were so affirming and safe.”

Chad and Baron began the adoption process and found that their biggest fear was the unknown. What would the match meeting look like? How would an open adoption work? “It was the roller coaster of emotions while we were waiting,” says Chad.

But even when the going got tough, Chad and Baron were surrounded by supportive friends and family, as well as Cradle staff. “I called our counselor all the time,” says Baron. The Cradle classes were also helpful in getting the couple through the ups and downs, especially with the network of fellow adoptive parents that formed during the sessions.

“It was almost like running a marathon,” says Chad. “You’re at mile 23 or 24, and everyone is rooting you on, so excited to see you finish.” Chad and Baron caught site of their marathon’s finish line the day they got the call about their son, Uriah.

On that day, the couple’s counselor called Baron, who in turn called Chad with the wonderful news. Over the phone, Baron asked Chad, “Are you sitting down?”

Baron said, “You’re not going to believe it, but we’ve been chosen.”

Chad and Baron were so excited, especially since they had a previous possible match that didn’t work out. “It was a really incredibly day,” says Chad.

The couple quickly began to form a relationship with their son’s birth mother. “Before the first match meeting, Baron was pretty cool and confident, and I was a hot mess,” recalls Chad. As the meeting progressed though, conversation flowed comfortably. Chad and Baron gave Uriah’s birth mother a jar of homemade salsa as a little gift, and in return, she presented the couple with an ultrasound of their future son. “We left the meeting feeling really encouraged. It was a really good experience,” says Chad. Now, the couple and Uriah’s birth mother are always in touch, and they see her a few times a year so she can visit with Uriah.

A little over a year has passed since Chad and Baron welcomed Uriah home, and so much has already changed. “To see how radically different my view of the world is as a father, I think it’s made me a fuller and more appreciative person,” says Chad.

They are also thinking about Uriah’s future. “I hope he grows up and does something meaningful with his life, whatever that that may be,” says Baron.

“That he’s a person of integrity, a person of passion, of honor and respect, I think that’s what matters most to us,” adds Chad.

For now, Uriah is a happy 16 month-old boy. He’s even turning into a savvy, big city baby. Baron and Chad live in Chicago where Chad is an elementary school principal. This past summer, Chad and Baron regularly strapped Uriah into the BabyBjӧrn and carted him all over Chicago, checking out the zoo and the street festivals so he could take in all the sights.

When they aren’t exploring the city, Chad and Baron like to relax with Uriah. “I like waking up in the morning with him,” Baron says. “He likes to roll around and smile in the morning.”

Chad adds that Sunday mornings are the best. “We just hang out with the newspaper, and he crawls all over us. We get to be lazy and watch him play with us. That to me is one of my favorites.”

And even when things aren’t as easy as Sunday mornings, Uriah’s parents love every moment with him. “When you are with this little guy and he’s crying and screaming at three o’clock in the morning, needing a bottle and clean diapers all the time, you feel he is a part of you,” says Chad. “He is a part of our family. He’s it.”

Chad and Baron have become a big part of The Sayers Center fpr African American Adoption at The Cradle. Baron, a photographer, has joined the Sayers Summer Soiree Committee and is lending his talent to create great invitations and capture some great moments with Sayers kids!

You don’t want to miss this great event! Get your tickets for the Soiree here: www.cradlefoundation.org/sss