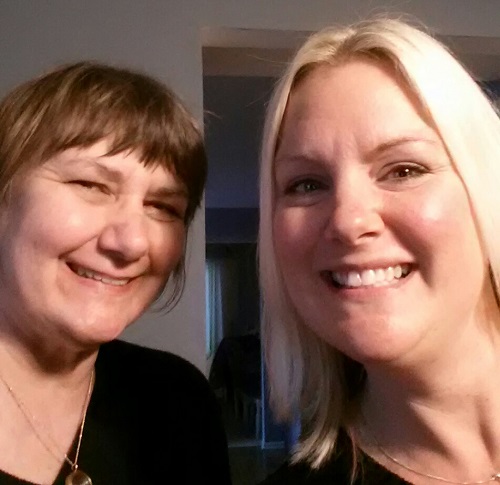 At age 21, Bonnie was raped – a secret she kept for more than 25 years. Her resulting pregnancy, something only her parents knew about, was kept fairly hidden as well. She knew that motherhood was not an option at that point in her life.

Through The Cradle, Bonnie found a job as a mother’s helper to pay her medical bills. At the end of October 1969, Bonnie gave birth to Wendy and placed her for adoption. She reconciled her decision with the fact that she was giving a family a very special gift.

Wendy went home from The Cradle Nursery with Annie and Dennis Wheeler. She had a happy childhood in the Chicago suburbs, growing up with an older brother who was also adopted through The Cradle and a younger brother born to her parents. She never felt sad about being adopted or dissatisfied with not knowing her birth mother.

“Most of the time, adoption wasn’t even in my head. They were my parents. They were very loving and caring and did everything they could for us,” Wendy explains.

Meanwhile, Bonnie tried to move on, still keeping Wendy’s birth and adoption a secret – one that would burden her for years to come. She married a man she knew from her childhood and moved to Georgia, but the marriage didn’t last.

“Something happened. I got very numb. I spent my life wandering around keeping this secret. It affected my relationship with my grandparents, who I was really close to. It kept me distant from everybody. I’ve been on my own healing journey over the years,” said Bonnie.

At age 25, Bonnie began to look for Wendy. She moved back to Illinois and visited The Cradle, leaving a letter and pictures for Wendy and adding her name to the adoption registry so that Wendy would be able to find her someday.

More than 20 years later, Bonnie connected online with a woman named Tina. Because Tina was adopted from The Cradle and shared Wendy’s birthdate, Bonnie thought she had found her daughter. After reaching out, the conversation did not go well, and as quickly as they met, the woman who Bonnie thought was her daughter was out of her life.

Bonnie later moved to Michigan in order to reconcile with her family, who had become distant in the years since Wendy’s birth. Not long after moving, she received a call from The Cradle letting her know that the daughter she placed was interested in meeting her.

Wendy had gotten in touch with The Cradle to inquire about her birth mother’s medical history. She’d had a recent health concern and wanted some background information for her daughter’s sake, too. What she hadn’t anticipated was learning that Bonnie’s letter and pictures had been there, waiting for her. After reading the letter and looking at the pictures, Wendy decided to reach out to Bonnie.

“I knew this poor lady needed closure; she was in bad shape. I just thought, if she is still on this earth, she needs closure,” Wendy says.

Because it had been many years since Bonnie left her letter, The Cradle contacted her first to see if she still wanted to connect with Wendy. When she said “yes,” the counselor forwarded a letter from Wendy to Bonnie.

At first Bonnie was distrustful, thinking she had already found her daughter online years earlier. Once she received Wendy’s letter and photo, however, she knew.

“I was looking at the picture of Wendy and thinking, ‘Oh, my god, this could be [my daughter] Jennifer! This is my daughter, no doubt about it,’” Bonnie says.

The two started emailing and became Facebook friends. Eventually they met, and both remember an air of familiarity during that first conversation.

“I felt like a combination of myself and my best friend was sitting across the table from me,” said Bonnie.

After that get together, Bonnie met Annie and Dennis. She toured the home where Wendy grew up and the four enjoyed lunch together.

Wendy had actually been nervous about telling her parents she had connected with Bonnie. As Annie explains, “It came out of the blue. Wendy called one day and asked if she could talk to us, but she didn’t want Emma there. I can’t tell you the things that went through my mind – Was she okay? Was Emma okay? Of all the things I could think of, Wendy finding her birth mother was absolutely not one of them!”

Although Wendy’s announcement came as a shock to her parents, it was also a relief. “Frankly it was much better news than all the things we were scared she might tell us,” Annie said. “It also seemed a very natural connection that she would find her birth mother. This was in no way threatening to us.”

Over their first lunch together, the Wheelers got to hear Bonnie’s story firsthand. “She’s a very forthright, interesting person, who’s had her ups and downs,” Dennis observed. “We were glad to be there. It was a positive experience.”

It was positive for Bonnie as well.

For Bonnie, this journey has been incredibly healing. She has been able not only to reconcile with herself but with her mother, too. After she first met with Wendy, Bonnie found the courage to tell her mother that she had been raped all those years ago. Since this disclosure, the two have gone through a period of healing and forgiveness.

Now at peace with herself, Bonnie wants to write a book about her life.

The photo above was taken at Wendy’s house in October 2014. Wendy, center, along with daughter Emma, 11, had her parents, Dennis and Annie, and birth mom Bonnie over for lunch.