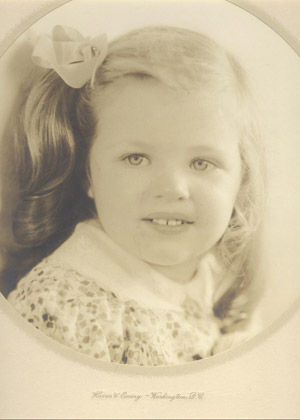 Born in Chicago on July 26, 1935, Mary spent six weeks in The Cradle Nursery before going home with her parents, Emily and Horace Mallon. Two-and-a-half years later the couple adopted Mary’s brother, Michael. When Mary was a very young child the family moved to Clarksville, Tennessee, where her father had taken a job.

The Mallons divorced when Mary was in second grade and life became rather chaotic. Her mother fell ill, so the children were sent to live with their aunt and uncle in Massachusetts for a year. Emily recovered, and Mary was back in Tennessee for the start of fourth grade. “I was a solitary kid,” she reflected, “a loner. But I liked to read and write. I spent an entire year reading fairy tales.” In the third grade Mary composed a poem that was so well written her teachers accused her of plagiarizing – and later apologized when they realized their error.

When Mary was 14 her mother decided to pursue a master’s degree at the Sorbonne in Paris, taking the children with her. Mary had the unique experience of living with a French family and spending her freshman year of high school abroad – the first several months at the American School of Paris and the last three at the Lycée de Sèvres. It was also in France that Mary’s artistic interests began to develop, as Paris offered her a wealth of wonderful subjects to draw. Upon returning to Clarksville, Emily got a job teaching French and Mary attended the local public high school for the next two years. She spent her senior year at the National Cathedral School in D.C., graduating in 1953.

Mary, top row center, with her kids in 1973, when she successfully ran for Wareham’s School Committee. Flanking Mary are her eldest, Robert, on the left and John on the right. In front are Emily, Helen and Daniel.

Mary went on to earn a B.A. in English from Wheaton College in Norton, Massachusetts. “I was very happy there,” she said. “I was co-editor of the literary magazine and took every art class offered.” In graduate school at Boston University, Mary landed an assistantship in the Department of English, studying with Pulitzer Prize winner and former Poet Laureate of the United States, Robert Lowell.

After completing her master’s degree, Mary taught English for more than two decades at various levels, from high school to junior college to her alma mater, BU. Mary’s published works include a volume of poetry, a novel and a textbook. Her poems and essays have appeared in different literary magazines. Along the way she also received her Certification in Art and raised five children – three sons and two daughters – all but one of whom live near her today. Mary has 11 grandchildren.

Adoption was always an open subject in the Mallon household when Mary and Michael were growing up. “My mother was very positive about it,” Mary recalls. When a conference brought her to Chicago several years ago, Mary decided to pay a visit to The Cradle.

“I came back at age 70 and it was a wonderful day,” Mary said. “It means a lot that The Cradle Society continues to be an aware and open organization. I got to see the babies in the Nursery and see a baby go home with his new parents. It was seventh heaven for me!”

Since her retirement in 1994, Mary has spent her days doing what she loves: painting favorite areas of Maine, Cape Cod, Tuscany and Provence, and continuing to take art classes. She also makes handcrafted jewelry. You can see more of her work on her website.

Apple and pear
Surmount New England stone
again.
The ocean melds into the clouds.
The fog hides buttercup and weed
along the pasture fence.

My senses mushroom in the dark
recesses of the barn
Under muzzles, soft and warm,

Of the solid, strong and tender
beasts,
Dumb from the fields of life’s
abundance.

In spring it is time to go forth
into the world again –
Unfolding, yielding and free.