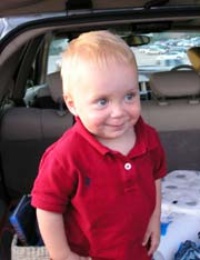 Published October 2005
By The Cradle Staff

Terri and Chuck Petry adopted their son, Max, through The Cradle’s Russia Program in February 2005. Max, who was born in the Astrakhan Region of southern Russia, came home with his new family last February. Read about the Petrys’ sometimes frustrating and ultimately joyful journey to bring Max into their lives.

Terri: Hi! We are Terri and Chuck Petry, and our son is Max. His formal name is Maxwell Edward Petry. He is named for both of our fathers – Martin Ellis Hollander and Richard Edward Petry.

What helped you decide to adopt through The Cradle?
Terri: After we stopped our infertility treatments, we realized that we still truly wanted a child. My mother mentioned that The Cradle had been in business for eighty years, and we should work with an agency that has been established for a long time and has a good reputation. I did more research and heard many positive things about The Cradle, and its past history of working with so many families helped us make our decision on an agency.

What was it like to receive your referral?
Terri: It was a very awesome feeling, and it was scary. We were sent a video, and were looking in awe at this little boy. He looked like Chuck’s father Richard (Richard passed away in 1999). Chuck bonded with the baby almost instantaneously, though it was a little different for me. I was very guarded. The thought that he was going to be ours and we were going to have a new life together as a family, that feeling was just beyond what words can describe.

How was the information on the referral? Was it something you were nervous or excited about?
Terri: Initially, it was scary because they use medical terms in Russia differently than we do in the U.S. We sent the referral to a Russian doctor in Chicago who told us not to take him, and that just crushed my husband. Kristin and Christine, our counselors at The Cradle, were able to talk us through this. The Cradle also allowed us to take my cousin Jennifer with us to Russia. She is a child social worker in the Detroit suburbs. She did an evaluation on Max the first time we met him and confirmed what The Cradle had told us – he was a beautiful little boy, a real keeper!

What was the adoption process like once you got to Russia?
Terri: Whenever you’re in a foreign country it’s difficult. The one thing that made us feel very fortunate was our Russian coordinator, Marina. From the minute we stepped foot in Moscow, our baggage was handled, she checked us in to our hotels, and even found a tour guide for us, so we could explore the city. So, in a way, as lost as we felt since we did not speak Russian, Marina was outstanding and truly made us feel comfortable in Moscow and Astrakhan. She was like our “mom” away from home.

Chuck: I remember the mounds and mounds of paperwork and different background checks. Our fingerprints expired days before we were to leave for our second trip, so we had to go back and get them redone. Things like that got really frustrating, but we knew the end result was a dream and a treasure – Max. Initially we were in one region, and the officials requested another type of form, so we had to run around and get it signed and notarized. All the running around we had to do to be sure the adoption happened was unbelievable. It was almost overwhelming, when I think about it now.

When you were in Russia and you were able to see Max for the first time, what was that like?
Terri: We were speechless.

Chuck: We were. He was in the hospital because he had bronchitis. When we first met him in the hospital, we were in this tiny little room. Marina was speaking with the nurse who was holding him, and we were just sitting there in awe. The nurse turned around and handed Max to me. Max looked at me with a happy face, thinking “This isn’t so bad.” He never looked away from me. I gave him a little tickle under the chin, and he gave us this great big grin.

Terri: Max had a big smile on his face, and his whole face was just lit up. We realized at that moment this was all meant to be, this is our son!

What are some of your favorite memories of meeting Max?
Terri: I guess, the way he looked at us. He knew that Chuck was his dad. He knew why we were there. You should see him now, he’s just so perfect. He loves people and laughter – that is what we saw on our first meeting.

What was it like to bring him home and start a family right away?
Terri: In some ways, it was a culture shock to us because our lives had been structured to adults without children, our working hours, social life, etc. We celebrate our 20th anniversary this October! But then, we had a new purpose to life. It was all about our son Max! We are responsible for the well being of this little boy, to provide and nurture him. It is quite different from raising our 3 cats!

At first we were also concerned that we missed a lot of his “firsts” because he was 18 months old when he came home. But we were wrong. We were able to show him his first rainbows, plane ride, snow, rain, family, the list is endless that were his “firsts.”

Chuck: Some kids and even some parents take all this other stuff for granted by 18 months old, but with Max, everything was new, and it was just remarkable.

How is Max doing in his new life? What are your favorite things to do together?
Terri: Every day there is something different. We love watching him eat everything and trying to talk. He is now just starting to say “uh-oh” and “no,” and hearing his little voice and watching his personality blossom is amazing. When he just started taking his first steps by himself we would just sit back in awe. Here this little guy has been home for not even two months and he is already walking, feeding himself with his fingers, and it felt like he has been with us forever! What was life before Max?!

Chuck: That’s exactly right. It’s just amazing how well he’s adapted to us. When we went to the orphanage to pick him up and bring him back to the Lotus hotel – he never looked back.

Terri: One of my favorite things I do enjoy is watching him sleep at night because he is so much at peace.

What does Max’s future look like?
Terri: He’s going to attend the University of Michigan! First things first! We want him to grow up like any little boy in America. We want him to know how lucky we all are to have each other and be a family.

Any final words of advice for parents considering a Russian adoption?
Terri: Expect delays and trust your coordinator. Don’t second-guess everything. The Russian coordinators are trying to understand us while we are trying to understand them. Marina, our Cradle adoption coordinator in Russia, was outstanding. She helped us through each day in Russia. She was as frustrated as we were when things weren’t perfect, and was very happy when things were ok.

Chuck: Just relax and take everything in.

Terri: Take one day at a time. Realize that The Cradle and their coordinators in the U.S. and in Russia will do everything they possibly can to bring you and your child home safely. We are blessed to be part of The Cradle’s family.