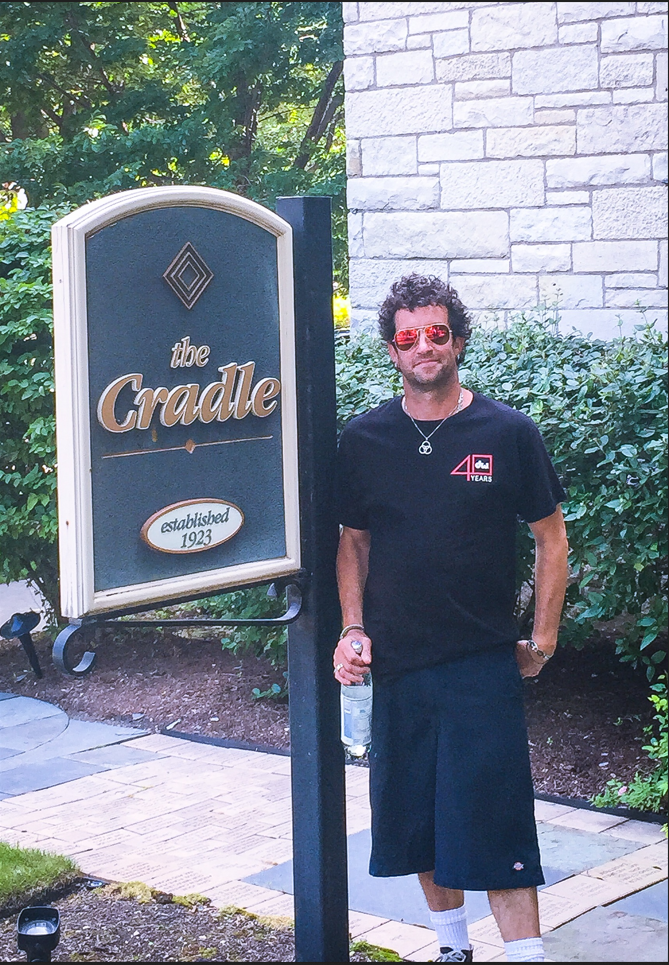 At The Cradle, no two adoption stories are ever the same. Cradle adoptee Scott Carneghi’s unique journey led him from southwest suburban Chicago to Los Angeles and a successful music career.

Scott was adopted from The Cradle in 1970. His sister Jayme, also a Cradle baby, joined the family in 1975. Both were closed adoptions, although adoption was never a secret for the Carneghi siblings.

Growing up in Joliet, Illinois, Scott spent much of his early childhood in and out of clinics, struggling with health issues. It was his doctor at the Mayo Clinic who suggested to Scott that he concentrate his extra energy on drumming. He took to the drums immediately, showing an innate talent. After graduating high school in just three years, Scott moved to L.A. at the age of 18 to pursue his musical aspirations.

There, Scott perfected his drumming skills and in 1991 landed his first record deal. His busy musical career since then has included performing and recording with various rock bands, as well as writing and recording his own work.

In the midst of all his successes, however, Scott began to feel as if something was missing.

Scott and his father, Joe, a plumber with his own company, have always been very close and have a wonderful relationship. However, Joe was not as artistically inclined as his son, leaving Scott to always feel a little different. With the advent of the Internet, Scott would search for adoption information as he grew up, though he never fully committed to reconnecting – until a few years ago.

With a gentle push from his fiancée, Lindsay, Scott decided to call Nina Friedman, Director of Post Adoption Support at The Cradle. Nina facilitates birth relative searches and reunions.

“My lovely fiancée basically said, ‘Either you’re going to do it or you’re not,’” Scott recalls. “I was getting too old for this stuff; I had to figure out where I came from.”

Following an initial conversation with Nina in 2012, subsequent talks with her about the search process, and learning he had an older sister placed through another adoption agency, Scott was finally ready to move forward in the spring of 2015. Through confidential correspondence, Nina was able to connect with Scott’s birth aunt, Barb, who informed Nina that her sister, Scott’s birth mom, had passed away in 1998.

Barb had known about her sister’s pregnancy and adoption plan and actually had saved letters her sister had written to her during the pregnancy. Barb was thrilled to hear from The Cradle and was eager to connect with Scott to learn about him and share everything she could with him about her sister and their family, including that he had another sister who his birth mother had raised.

Scott and Barb first spoke in May 2015 over the phone. They clicked right away and she quickly introduced him to the rest of the family. He learned that he has a cousin, Barb’s son, with whom he shares some uncanny similarities. This cousin is named Scott, too, and he’s a musician, but a bass guitar player, not a drummer.

“It feels good. Scary, you know,” Scott says of his reconnection. “It’s something I had to do, though. A piece of me was missing.”

Last July, Scott paid a visit to The Cradle during a trip home to spend time with his dad in Joliet. He told Nina that he planned to get together with his Aunt Barb and cousin Scott the following month in California.

After the visit, Scott emailed Nina to let her know the meeting went great. “It was everything I hoped for,” wrote Scott. “It’s a sense of closure, but it’s also opening up new and different avenues.”

Looking forward, Scott hopes to search for and connect with his birth sister and birth father and deepen his relationship with his birth mother’s family. “Contact with my biological family has been lovely,” Scott wrote to Nina in an e-mail. “Thank you from the bottom of my heart.” Barb sent a note of thanks to Nina as well, for “helping to enrich all of our lives.”

Read more about Scott and his music by visiting his website.

Learn more about The Cradle’s background, search and consultation services.