MY FAMILY IS MY WORLD: A CRADLE MOM REFLECTS ON HER ADOPTION JOURNEY 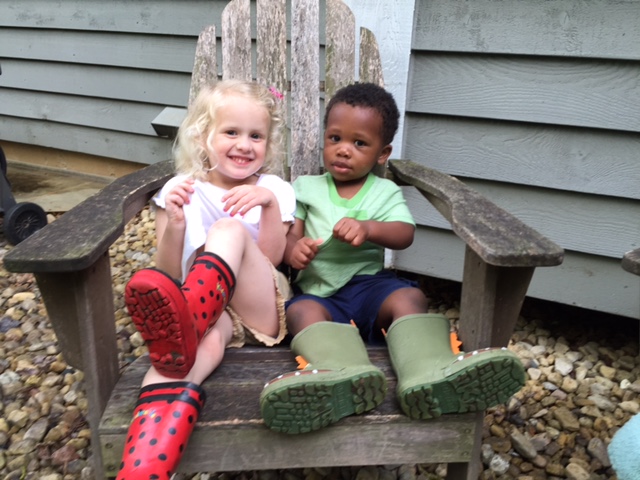 Immediately upon picking up the phone, and throughout their conversation, Pam Kavanagh let the interviewer know what her Cradle babies were up to.

I know what you are calling about, and the two subjects of interest are tackling each other right now.

Pam and John were in their mid-30s when they got married, after meeting on Match.com. Pam jokes that her dating profile on Match helped prepare her to write an honest and comprehensive adoptive parent profile. After several failed attempts to become pregnant, the couple decided to start a family through adoption.

Initially, Pam and John considered adopting from three different agencies, including The Cradle. In fact, Pam remembers that neither she nor her husband predicted that The Cradle would be the right choice for them, as the other two agencies were smaller and seemed more personal. After visiting The Cradle and meeting the staff, however, the couple soon realized that the organization would play a major role in their lives. “It just had a feel,” she said. For them, The Cradle’s strong focus on the birth parents and the child was ultimately what differentiated it from the other agencies.

That was nice, Teagen! She just gave her brother a kiss on the nose after he fell down.

There was a lot of emotion and anxiety surrounding the adoption process and the idea of an open relationship with the birth parents, particularly for John. As a social worker, Pam was more receptive, but she also felt conflicted knowing how badly she wanted to start a family while also feeling the strong desire to support the birth mother should she choose to parent her child. After speaking with Cradle counselors and enrolling in the various classes The Cradle offers for prospective adoptive parents, Pam and John started to become more comfortable with the idea of openness. Through the support of Cradle staff, they were able to patiently prepare for the life-altering months ahead.

Pam describes Teagen’s adoption as “crazy quick.” She and John joined the list of waiting families in October of 2010, received a call from their Cradle counselor in December, and brought their daughter home in February.

The Kavanaghs had established a close relationship with Teagen’s birth mother and were graciously invited to attend the birth. Before signing the surrender papers, however, she needed some reassurance that she would still be part of Teagen’s life. During a long, heartfelt phone conversation, Pam assured her that they were committed to openness as the best option for all involved. Five years later, the Kavanagh family still enjoys a positive open relationship with Teagen’s birth mom.

Then there was Kye, whose story is quite a bit different than his big sister’s. After Pam and John had decided that they wanted a sibling for Teagen, they applied to The Cradle in the spring of 2012. They went on the list in October, and waited patiently and hopefully for the right match. This time, they would wait several months longer than they did for Teagen, and receive many more calls about potential matches. The 11th and final call came in August of 2013.

“Euphoria and fear” is how Pam describes her initial reaction to receiving the news that she and John had been identified as a potential family for a baby boy who was already born and in The Cradle Nursery. While she felt immense hope and excitement, Pam also felt an increasing sense of anxiety as there were no guarantees that he would become the next member of their family.

In some cases, it is simply too painful or difficult for a birth mother to choose an adoptive family, so she will ask The Cradle to do so. Kye’s birth mother wanted her son to be placed with a family who had already adopted a child and who had been waiting the longest for a subsequent placement. The Kavanaghs were that family. So, when Kye was four days old, Pam and John received the joyful news that he would be their son. Sadly for them, however, his birth mother chose not to have an open relationship.

Yes, you can eat your carrots on the porch. Go on.

Since Teagen is Caucasian and Kye is African American, the Kavanaghs have utilized resources offered by The Cradle which have helped them to address important issues surrounding race and identity. Pam believes that awareness is most important when dealing with a multiracial family dynamic and realizes now that every child, regardless of race or gender, deals with questions about identity. She laughs and says “Today, Teagen believes she is Princess Elsa.”

When asked about the advice she would provide prospective parents, Pam emphasizes the need for education, and patience. During the process, Pam says, she and John learned a lot about themselves – more, in fact, than they ever wanted to know! She also says it’s important to remember that the ultimate focus is the best interest of the child, not the prospective parents.

Finally, Pam encourages prospective parents to take advantage of the many resources The Cradle provides, including adoptive parent mentors who volunteer as advocates during the adoption process. She is a mentor herself, and looks forward to playing a part in other families’ adoption journeys.

Pam says that she and John feel blessed every day to parent their two beautiful children. Given the setbacks of infertility, they didn’t know if they would have the opportunity to become parents. She explains that there are many ways to create a family, and that adoption is the fortunate route they were able to take to complete their own.

They are my world. My family is my world.