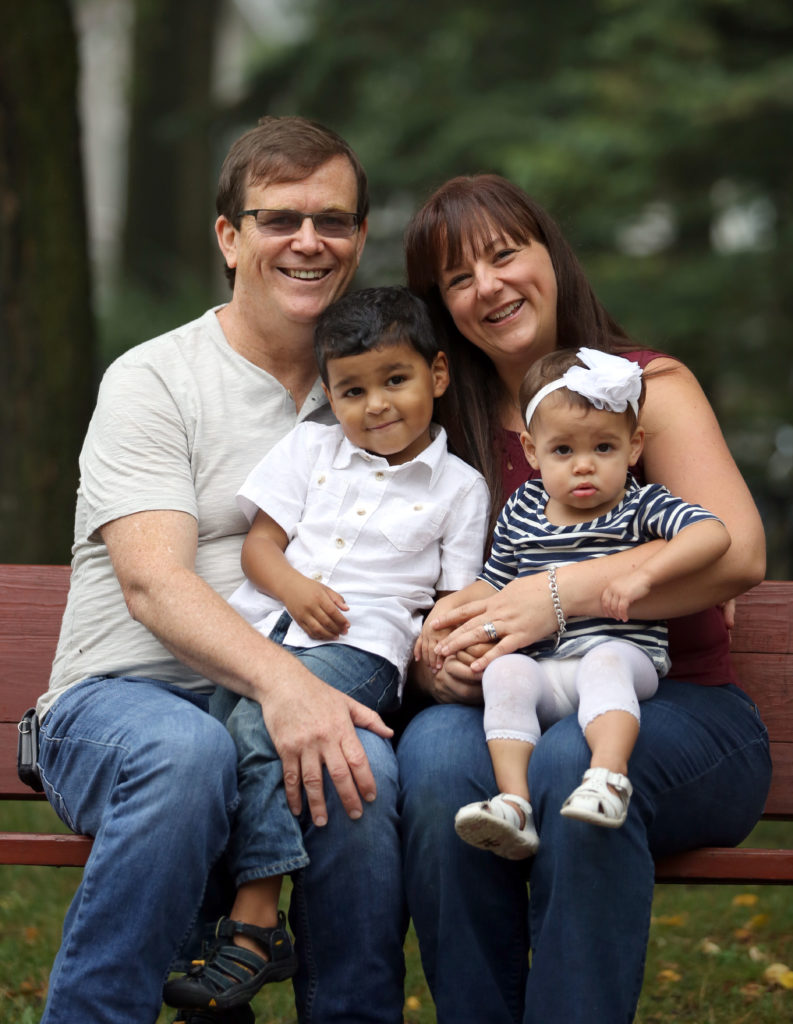 At three years old, Nick is a fiercely protective big brother to 19-month-old Zoey. She looks up to him like little sisters do, and no one can make her smile like Nick can.

They are both Cradle babies, and like a handful of children adopted each year, they are also biological siblings. Parents -Wendy and Matt Miller recount how their amazing adoption journey led them to two children who are perfectly matched to their family.

“Even when we were still dating, we always knew we wanted to have kids,” says Wendy. “Once we did get married and tried to get pregnant, we weren’t successful. Matt was ready to move to adoption pretty quickly. It took me a bit longer, but once I understood the whole process I was all in.”

They came to The Cradle because of the agency’s reputation and were soon immersed in the classes, paperwork and the myriad details that go into becoming a parent through adoption.The Millers worked diligently on their profile (Wendy called it a “labor of love” since she is a writer and loved the creative aspect; Matt felt the end result “perfectly captured who we are.”)

“This time, the baby was born and in The Cradle Nursery,” Matt recalls. “We were excited but still cautious, since we had been through a match meeting before, but there was a difference this time because the baby was already born.”

The match meeting took place at The Cradle in early October 2012. The birth parents and Matt and Wendy clicked immediately, and two hours went by in a blink. Cradle parents who have adopted recently will appreciate the next part of this story.

The Millers offered the most enthusiastic “yes!” of their lives.

“We had come in prepared for a match meeting – positive and hopeful, but because of the previous change of heart we had kept our expectations low,” Wendy says. “My mom was out of town. She had offered to cancel her plans, but I said, ‘don’t be silly – we’re not bringing home a baby.’ But that’s exactly what was happening!”

The Millers made a quick run to Target for baby essentials while the birth parents completed their side of the paperwork (Cradle policy requires that the adoptive parents leave the building when the birth parents sign surrender paperwork.) When they came back, they met their son for the first time, with his birth parents at their side.

Wendy describes the moment as “surreal.” “It was incredibly joyful but so bittersweet,” she explains. “We were the happiest that we could ever be… yet looking at these beautiful birth parents, we knew that the best day of our lives was one of the worst days of their lives. To love someone so much to be willing to make a decision like that is truly amazing.”

The first year of parenting was “blissful.” Matt is a stay-at-home Dad, while Wendy is a first grade teacher. They had openness with Nick’s birth parents, but also understood that sometimes the birth parents needed distance.

“We text and send photos, and there are times when we don’t hear back,” Wendy says. “Nick’s birth mom told us once that while she loves getting updates and seeing the photos, because it confirms they had made the right decision, it can also be painful.”

Matt and Wendy always knew they wanted more than one child, and when Nick was 18 months old they started talking about getting back on The Cradle’s list. Matt was at home one day when he got a call from Dana, their Cradle counselor. After a few minutes of catching up and asking about Nick, Dana asked Matt if he was sitting down.

“I said ‘Dana, the last time you said that to me you gave me a kid,’” Matt laughs. “So then Dana repeats it again – ‘Matt, are you sitting down?’”

It turns out that Nick’s birth mom had delivered a baby girl that very morning. She called The Cradle to ask – would Matt and Wendy consider adopting again?

“Subsequent pregnancies are not common, but they do happen,” says Dana Mulhall, now Clinical Supervisor of Expectant Parent Services at The Cradle. “Most women feel incredible stress, embarrassment and shame, and are very worried about being judged when they call The Cradle a second time. Our job is to assure them that we will always support them, we are always here for them, and we honor their courage and love for their child to be making that very difficult phone call.”

That was certainly the case for Nick’s birth mom.

“The birth parents were very worried that we wouldn’t be open to adopting again,” Wendy says. “There was tremendous relief on her part when we said absolutely ‘yes,’ that not only would we love to parent again, but it would further cement the connection to these amazing young people.” Daughter Zoey spent four weeks in The Cradle Nursery before coming home to join her big brother in April 2014.

Having biological siblings is great fun for the Millers, especially when they see the mannerisms of one child playing out in the other. “Zoey looks like her mom, while Nick favors his dad, but they both have dimples,” Wendy says. “Sometimes I will see Zoey do something and I will laugh because it’s a total Nick face!”

Wendy and Matt have praise for The Cradle’s process, but especially the support offered to birth parents. “I love that there is so much counseling and education for the birth parents,” Matt says. “I have told Nick’s birth parents – don’t ever worry about reaching out. Don’t ever think it’s too late, if five years goes by, you can always reach out for support to The Cradle. They will be there for all of us.”