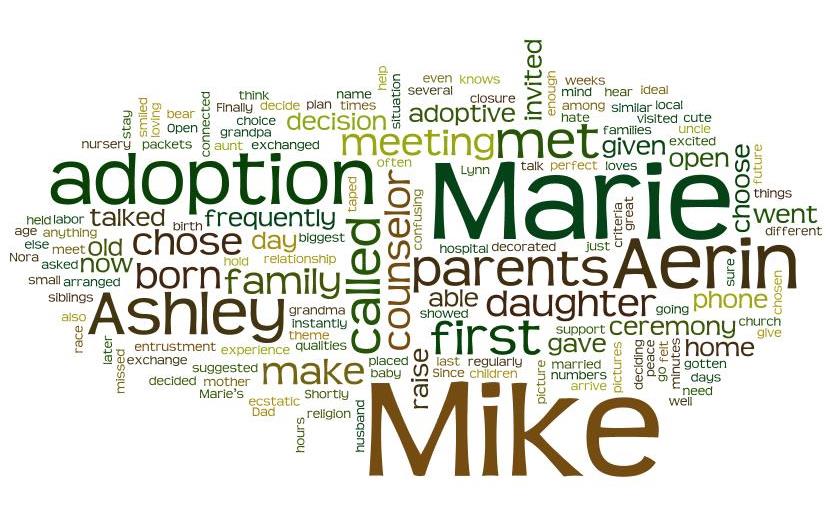 After deciding to make a plan of adoption for my daughter, Aerin, I asked my counselor how they would choose the adoptive parents. She smiled and said that was my decision to make, but I would first have to decide what qualities my ideal family would need.

I could choose the age, race, religion, and if the mother was going to stay home after the baby was born, among other things. After I chose the criteria, I was given several packets on different families. My counselor arranged a meeting with my first choice of adoptive parents and we met a few days later. I was excited to meet them!

On the day of the meeting I invited my parents to go with me. I felt they would be able to help me make a decision. When we met Mike and Marie, we connected instantly! My Dad gave Mike a picture of me when I was small. Then we talked about why they chose an open adoption. They said their daughter was from an open adoption and they would hate to not have a similar situation with any future children.

We talked for hours. Finally the counselor suggested we exchange phone numbers. We did and called each other frequently. After a few weeks I went to Mike and Marie’s home and met their daughter, Lynn. Marie showed me the nursery, decorated with a cute bear theme. Shortly after our last meeting, I was sure Mike and Marie were perfect to raise Aerin. They were both ecstatic to hear that I had chosen them!

I also decided how I would give Aerin, whose name is now Ashley, to Mike and Marie. I chose an entrustment ceremony. The ceremony was held at my local church, and gave me and my family great closure.

After I placed Ashley, I called Mike and Marie regularly, visited them, and pictures were exchanged frequently. Ashley is now old enough to talk to me on the phone. She knows my parents as grandma and grandpa, my siblings as aunt and uncle, and I am called Nora — I think anything else would be confusing.

Since the adoption, I have gotten married. My husband loves our relationship with Mike, Marie and Ashley. Open adoption has given me peace of mind as well as a loving family to raise Ashley.