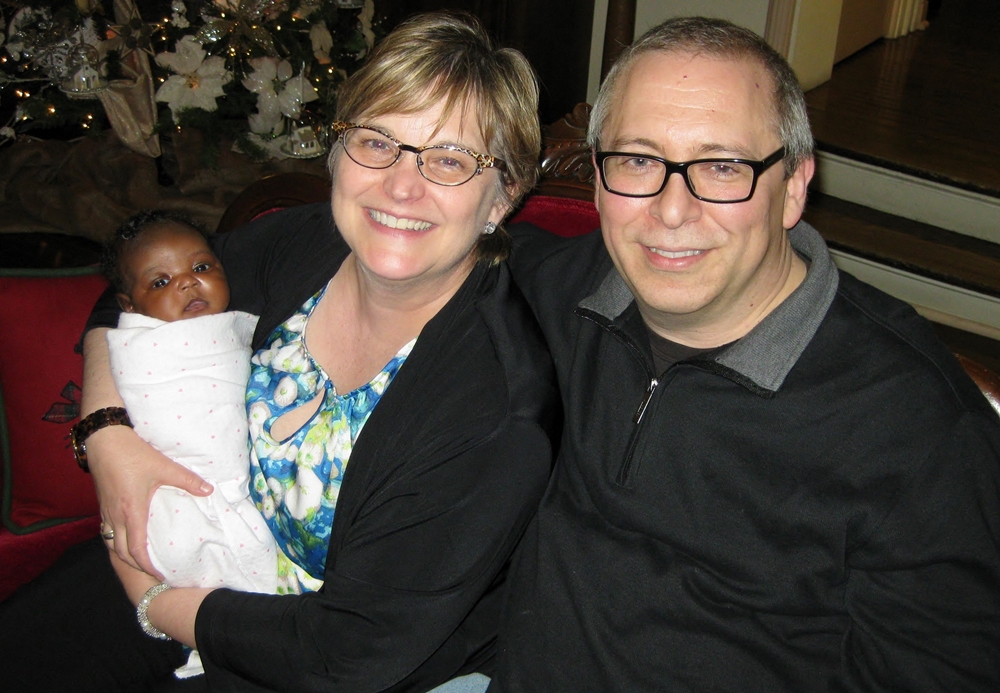 When Maggie Oswald and Ken Paquette decided to pursue adoption to build their family, they chose The Cradle, which Ken had learned about from his boss. They submitted an application and completed their home study, going on the waiting list in February 2011. And they waited.

It wasn’t until the beginning of December 2013 that Maggie received a call. There was a birth mother who wanted her baby to be placed with the longest-waiting Christian married couple – and that happened to be Maggie and Ken. The baby girl had been born on Halloween and had come to The Cradle Nursery a week later. She became Maggie and Ken’s daughter, Katherine Grace, on December 4.

“It didn’t matter what color we were. It didn’t matter how old we were. All the things you fixate on became a non-issue. It was because of this brave decision that we have this miracle child,” said Maggie.

A year later, Maggie and Ken have become accustomed to parenthood. They enjoy Katie Grace’s even-keeled personality as well as the spunk and sense of humor she brings to every day. They dream of her growing up to be confident and to find what makes her happy.

And the best part right now?

Maggie can barely contain her happiness.

“My heart has exploded. I’m just filled with joy. I will go to the ends of the earth for this child,” she said.

While difficult questions, the teenage years and even hair styling challenges seem to loom in their future, they are confident that everything will be okay.

“There is lifelong learning at The Cradle. We feel comfortable that there is always a resource to come back to if something comes up,” Ken said.

Ken and Maggie’s long journey with The Cradle was, ultimately, an incredible one. They are grateful for the experience they had and for the agency’s forthright and sincere approach.

“All of our questions were always answered. All of our fears were addressed. I never felt that our concerns weren’t taken seriously,” Maggie recalls.

Additionally, the education they received opened their eyes. The couple learned that openness was a philosophy to help the child understand the beauty, love andsacrifice inherent in an adoption decision.

“We realized it was the belief that this child should know how brave a decision her birth mom made: That there is no shame in placing a child for adoption. It’s the bravest thing we’ve ever known,” Maggie says. “We think openness promotes the well-being of the child and we’ve come to know the benefits it brings to the birth mom.”

Today, Maggie and Ken remain in awe of Katie Grace’s birth mother and hope that she feels at peace with her decision. To them, she is their hero, and Katie Grace is their miracle.