OUR OWN NURSE JENNY 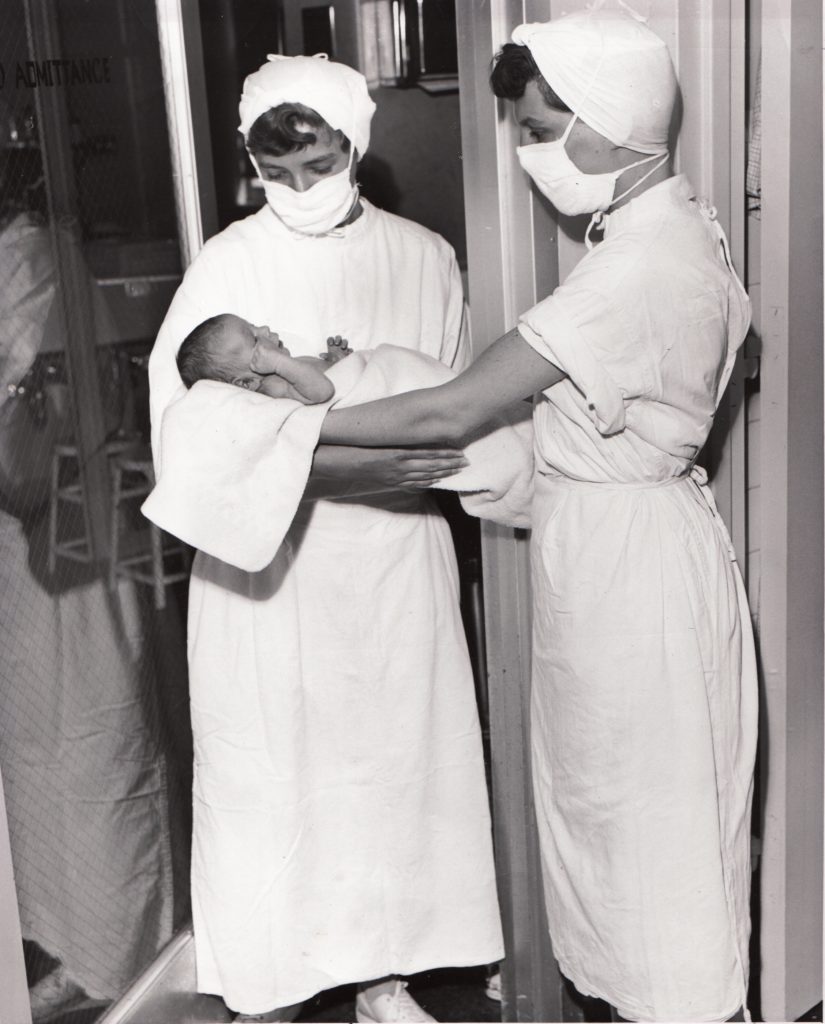 Last September, longtime Nevada resident Jenny Seljan Cordisco paid a visit to Evanston with her youngest son, Eddie, to show him the place where she trained as an infant nurse in the early 1950s and went on to train new classes of Cradle nurses. A photo of Jenny in her crisp white uniform, holding a Cradle baby, adorns the wall of our Nursery museum. We asked Jenny, now 82, to travel back 65 years and share with us what it was like to be a nurse at The Cradle in those days.

What made you decide to enter the Infant Nurse Training Program at The Cradle?

I grew up in Wisconsin and was the last of eight children. We didn’t have much money and my father passed away when I was a sophomore in high school. After I graduated, one of my brothers wanted to send me to college. I actually wanted to go to the convent and become a nun, but my older sister said I should think of something else. I just loved babies, and when I learned that The Cradle had a nursing school, I decided, “That’s where I’d like to go.”

How was the program structured?

It was a year’s course. I started in 1953 and graduated in 1954. Then, I stayed for two more years supervising and teaching. We lived in a brick house next to the main building, which had five nurseries: four for babies from the time they were born up to six weeks and a fifth unit upstairs for older babies, sometimes up to a year old. During training, we worked from 7 at night until 7 in the morning. We had a couple hours off in the middle of the night so we could have our lunch. Sometimes we’d go into the room where the babies were presented and we’d sit in there and play games. When I worked 7-7, I would make the coffee. There was a great big pot and I remember putting grounds in it, an egg and a pinch of salt. That’s how I was taught.

What did you and the other nurses do in your spare time?

We’d get off at 7 in the morning, have breakfast, and then quite often we’d go horseback riding. There was a wonderful stable not far from The Cradle. My horse’s name was King. We girls also liked to dance, so we would go to Howard Street where the clubs were. I convinced Miss Mitchell, the head supervisor, to let me and a couple other nurses go to mass each Sunday morning. It was a privilege that I really appreciated. There was a chauffeur, Carl, who had a room at The Cradle. We used to go to his room and listen to music, but we would get into trouble if we were ever caught.

Was there a particular baby you grew attached to?

Yes, there was one whose name was Stacy and he was my favorite. He was a little older, maybe three months old, so he was in the unit upstairs. I took him outside for walks in the stroller and took him to the doctor in a taxi. They even let me take him to my room. In those days they didn’t let the nurses hand the babies to the adopting parents, but they let me give Stacy to his adoptive parents. They were wonderful people, so it was easier to let go of him. But I still cried.

What were your tasks as a supervisor?

The trainees had to learn what I learned. I remember teaching them how to wash their hands, how to hold a baby, everything. You had to scrub with a brush each time you left an infant’s cubicle. Our hands and forearms were often raw. We’d do laundry and fold baby clothes. There was also teaching in the kitchen. They had to learn how to sterilize bottles.

What did you do when you left The Cradle?

One of the gals who had been at The Cradle, Audrey, was working as a nurse for the Cudahy family, who had a meat packing company in Omaha, Nebraska. Audrey was getting married so she asked me if I would consider coming to work for them. I thought this would be something new and different, so I agreed. The Cudahys had three adopted children at that time. Tinker was two, Hopey was one, and the baby, Toby, was six months old. Toby and I connected just as I had with Stacy at The Cradle. His parents were my role models. Tina and Tony Cudahy always treated me as a niece, not as a nurse. They needed me during winters at their home in Florida and when they adopted a fourth child. During my three years with them I also worked at Yellowstone and at a daycare center.

How did you meet your husband?

One Thanksgiving a former student of mine from The Cradle invited me to visit her and her husband in Hawthorne, Nevada. “Oh Jenny,” she said, “You have to meet this guy, Ed Cordisco, who’s a teacher here. If you met him you’d marry him. He’s the sweetest man.” I went out with him and he proposed on our first date. I didn’t really know him, so we dated for the next three nights and every night for a week when I returned in January. He asked me again after those seven days and I said “yes.” Ed passed away two years ago after 56 years of marriage. He was my special gift from God and the love of my life. We had four children, three boys and a girl, and I have seven beautiful grandchildren.

What is most memorable about your time at The Cradle?

I loved taking care of those babies. That was my joy. I’d put the older babies in the upper unit in their Teeter Babes, line them up, and I’d sing and dance for them. They used to smile and laugh and clap, which made my heart sing. They were all special.

Jenny acknowledges that in life, “every turn you make, you’re meant to be there.” Without her Cradle connections, she never would have met Ed. “You look at all the things you’ve done and realize that you needed to be there in order to get where you are now,” she says.