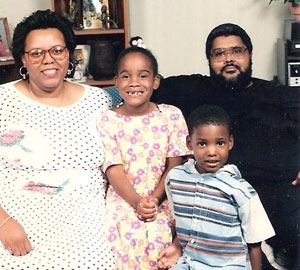 Published February 2011
By The Cradle Staff

Jalissa went home from The Cradle with Kenna and Simmie Meredith at 6 ½ months of age, having spent some time in foster care and a short stay in the Nursery. Now, as a young adult, she feels it is important to cast adoption in a positive light.

“I let everyone know that I am an adopted person,” Jalissa said. “This is an issue that many African Americans ignore or don’t want to talk about, because of the stigma of African American foster children and adopted children as somehow being damaged. As a student and as a queen, I do my best to represent this population to my utmost potential – to take a stand and let people know that we are out there and we’re successful.”

Jalissa’s parents adopted her brother, Simmie, Jr., through The Cradle in 1990, and the siblings enjoyed a happy childhood playing together and climbing trees in the backyard. “We had some marvelous times,” Jalissa recalls. She describes her little brother as a “happy, happy boy” who is now in college and doing well.

Jalissa has always known that she was adopted, and sometimes felt “a little sad” when looking at friends who so closely resembled their parents. Ultimately, however, she didn’t feel very different from her peers. “I was just pleased to have a loving family, so it didn’t bother me too much,” she said. “I’m so thankful for my mother and father. My mother, in fact, is my best friend. We talk several times a day and there’s nothing that I can’t tell her.”

Following her graduation in spring 2010, Jalissa returned to Illinois and decided to enter the Miss Black Illinois USA pageant. It was “one thing off my bucket list that I wanted to do,” she said. Jalissa had to provide background information and credentials (such as her GPA) and have an interview with representatives from the Miss Black USA organization. Another key component of the process was her platform – the message she would present to audiences throughout Illinois if she captured the title.

On August 1st of last year, Jalissa won the crown on the platform, “Touch the Sky,” which encourages all youth, regardless of gender, nationality, religion or sexual orientation, to achieve their personal dreams and professional goals. Education, Jalissa firmly believes, is the vehicle for making this happen. “Our children must recognize the importance of excelling in their academics,” she stated.

Jalissa also wants to serve as an ambassador and role model. Although The Miss America organization contacted her and asked her if she would like to compete in the Miss Illinois pageant, she declined. “Having ‘black’ in my title,” Jalissa affirmed, “means a lot to me. I want to be a role model, a representative of the African American community. While I serve everyone in Illinois, it’s very important to let people know that African Americans are moving and shaking.”

Her duties as Miss Black Illinois USA 2011 include participation in community events and speaking engagements such as a recent STEM Summit (Science, Technology, Engineering and Math) for young girls, as well as a women’s reception hosted by Mayor Richard M. Daley. Jalissa is also a full-time graduate student, pursuing a Master of Science degree in Integrated Marketing Communications at Roosevelt University in downtown Chicago.

“I am a student on the weekdays and a queen on the weekends,” she said with a laugh.

What’s next for this busy young woman? In August of this year, Jalissa will represent Illinois in the Miss Black USA pageant in Washington, DC, competing for the national title. This will be the conclusion of her pageantry experience, she feels, so that she can pursue her own dream of earning a Ph.D. in marketing and advertising and landing a brand management position with a major corporation, such as McDonald’s.

By the example she has set, and the hard work she has done, Jalissa Meredith is well on the way to realizing her goals and dreams.