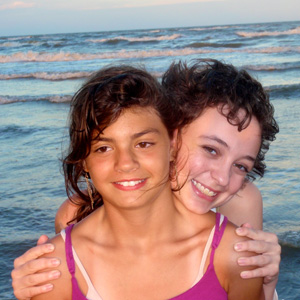 I was the first person in my family, outside of my parents, to hold my sister. I had only just turned five at the time, and did not quite understand the logistics of adoption, the figurative birth of a child into a family. All I knew was that here was this small, scrunched up little thing and that she was mine to keep. I held my arms out, and she was settled in them, her pink newborn face wrinkling as she was jostled.

My sister, in her infant sleep, looked either deep in thought or constipated, her little brow furrowed, her small cherry mouth pursed in concentration. Dreams played out on the movie screen of her face, small fingers flexing and toes curling. My mother tells me I was much the same, my face an open book, my heart begging to be written upon.

She is eleven now and I am sixteen. We are more different than alike, separated by more than uncommon backgrounds. She is stretching tall, her shoulders broadening, and her feet are that of a puppy – they showcase what she is yet to be. Her bones are heavy and weigh her to this earth. She is substantial. I, on the other hand, am deceptively frail, bird-boned. With my child-size hands, small feet, and blue veins starkly contrasting my winter skin, I am feather-like. In danger of floating away. I sometimes hear that we look alike, and I suppose our hair, or the way our eyelids curve can lead to the assumption of similarity. But I see more of the things that separate us, like the Guatemalan heritage that warms my sister’s skin, or the depth of the green in my eyes.

It goes beyond looks. She is louder, less subtle in our fits of animosity. She has never been able to manipulate words the way I do. She bends over fifth grade schoolwork with that familiar knitted brow, frustrated, color deepening her cheeks. What I breezed through does not come easily to her. On the reverse side, she does not trip over her own feet, large as they may be. She skirts around a soccer ball, swings a bat, throws a pitch. She does it well, and gains a smile from my father, who paces the sidelines. I tried to do the same, but failed. I am more likely to forget and use my hands to pick up the soccer ball than to actually score a goal.

We are only eleven and sixteen, but there is already some firm division between us, something that looks like it cannot be crossed. But when people, upon learning we are both adopted, upon the knowledge that we share no chromosomes, no twisting strands of DNA, no common blood, say, in their ignorance, “So, you’re not real sisters?” I am offended. Of course we are real sisters.

Our ties go further than a similar blood type or shared predisposition to heart disease. They were created in front of the bathroom mirror, when I drew make-up on the dew of her youthful face. They were born when she curled up next to me during thunderstorms, afraid of nature’s chaos and unwilling to admit her fear. They formed Christmas morning, when we set the alarm early and took the stairs two at a time. We have more than common blood. We have a common childhood.

We are but eleven and sixteen, but we are already our own people. We are defining ourselves, and these definitions are often polar opposites. But, still, at eleven and sixteen, I can already see some similarities. They’re in the way that she smiles, the nervous tapping of her fingers. It’s in the way she studies me sometimes, carefully mirroring my habits, both good and bad. It’s in the way that, sometimes, when I look at her, I see myself.