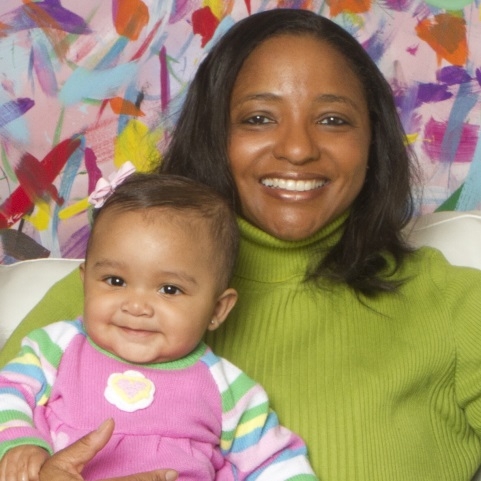 Micah, now 20 months old, was born on March 4, 2013 and spent seven weeks in the Nursery before Wendy came to The Cradle to take her home. Wendy’s mom and sister were here, too, on that joyful spring day in April.

As a single woman, Wendy always knew she would adopt when she was ready for children. When that time came, she turned to The Cradle. The available resources – such as a counselor who would be with her throughout the process, other families who had been through adoption, and education about openness – helped her prepare for what was to come. She submitted her application to the Sayers Center program in May of 2012.

Like many prospective adoptive parents, Wendy had questions and concerns about open adoption. “You just don’t know what it means initially,” she explained. But after talking with her counselor and taking classes such as “Transitions to Openness,” it made sense to Wendy.

“Children can’t have too many people in their lives who love them,” she observed.

Wendy’s adoption journey with The Cradle was much faster than she expected—her profile was selected and she met Micah’s birth mother just a few months after completing her home study and going on the waiting list. But she believes this match happened exactly as it was meant to.

“We both looked at each other and I thought, ‘Wow, we sort of look alike!’” Wendy recalls. “Everything went really well.”

“I was very interested to compare nature versus nurture,” Wendy says. “But Micah was more interested in her birth mother’s cousin’s iPhone than anything else.” The two women hope to introduce Micah to her birth sibling one day.

Though Wendy’s extended family was initially skeptical about the adoption process, they quickly jumped on board and love Micah as their own.

“I went into it planning to go it alone, but luckily, it didn’t turn out that way,” Wendy said. “I have everyone clamoring to get to Micah. She’s well loved by all.”

Today, Wendy balances her role as Micah’s mom with her full-time job at Abbott, where she is AQR Program Manager and chairs the company’s Black Business Network. For her achievements both inside and outside the office, Wendy was recently awarded the title of Abbott’s 2014 Working Mother of the Year.

Though parenthood comes with new challenges every day – and being a single parent has its own unique challenges – Wendy is reveling in her life with her Cradle baby.

“Micah is just a happy little girl,” Wendy says. “I can’t imagine loving a child any more than I do her.”

To read the article about Wendy in Working Mother, click here.