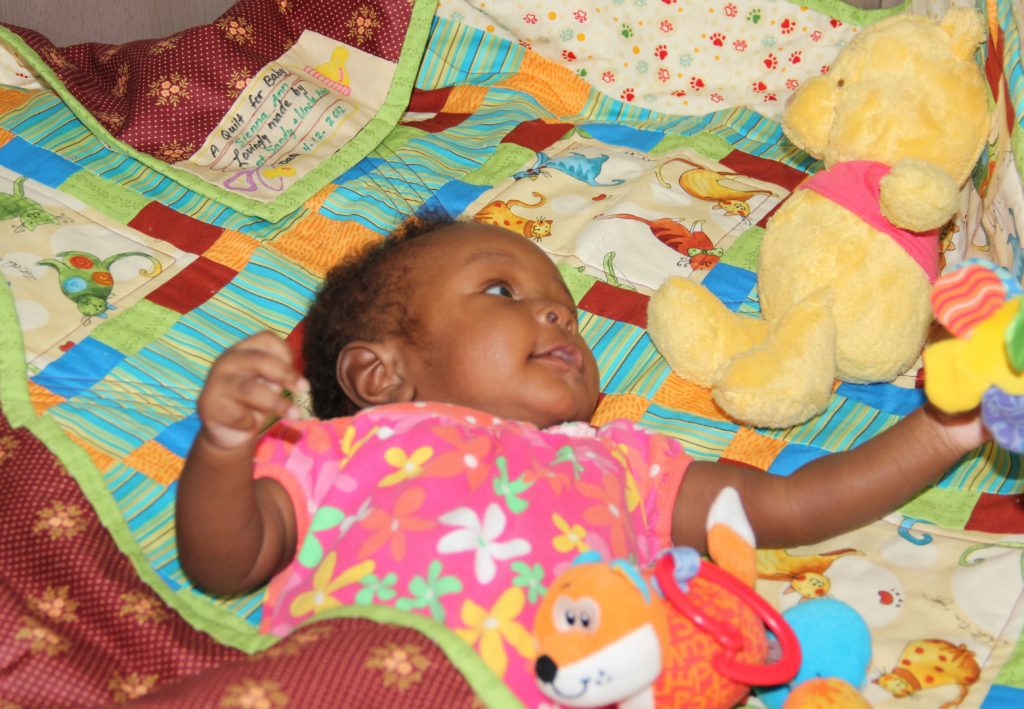 Sayers Center parents Edwina “Edde” Jones and Lorrie Lynn felt honored and lucky to be in the hospital on April 12, 2012 – the day their daughter Sienna was born. They were there at the invitation of Sienna’s birth mother, with whom they had established a strong connection from the beginning.

Edde and Lorrie waited a long time to adopt. “We wanted to make sure that we would be in a position to take care of a child, to give her everything we could,” explained Lorrie. When that time came, the two went to The Cradle, knowing friends who had adopted through the agency and knowing The Cradle would be completely open to them as a couple. “We were nervous, we were curious and we were excited,” Edde recalls.

They even found the required coursework exciting. “Both Edde and I have master’s degrees,” said Lorrie, “so the chance to take classes again was fun for us.”

The couple completed their home study in July 2010, went on the waiting list a few months later, and then waited a long year and a half to hear that they had been chosen. By that time, they had started to give away the baby clothes and toys they had collected. They also set themselves a deadline, knowing that if a placement didn’t happen, they would have to move on. But in their hearts, they weren’t ready to give up hope.

When Edde and Lorrie finally got the call from their Cradle counselor in the spring of 2012, they were amazed. “At first it was disbelief, like, ‘really? Someone chose us?!’” They began to prepare for the baby’s arrival, discussing names and calling friends who had been through the process to ask for advice.

They also had a very positive first meeting with Sienna’s birth mother. There were specific things that she wanted for her child, such as an appreciation of travel, nature and animals – items that were in the couple’s profile. “These were experiences that she didn’t get to enjoy often,” Edde explained, “and she wanted her child to have them. When Lorrie and I met her, she told us this, and it made the bond between all of us that much stronger.”

After Sienna was born, she spent 10 days in the hospital’s neonatal intensive care unit and another day and a half in the pediatric ward. Edde and Lorrie developed a routine of visiting the hospital, spending time with Sienna and her birth mom. Although Sienna’s birth mom was discharged from the hospital days before the baby was released, she came back for the placement ceremony on April 24. “We took a picture of them together so that they would each have a photo from that day. It was a great moment,” Lorrie said. Then the welcome home parties began – several of them.

It has been a year and a half since Sienna came home, and this little girl is the center of Edde and Lorrie’s world. They love walking her through their garden, her little hands holding on to theirs as she takes in the sights and the smells. They are teaching her the name of every plant. “I don’t think there’s anything else in the world like it,” says Edde. “The way she holds onto us as she gets all bright-eyed looking at everything. That’s the best thing.”

Edde and Lorrie send photos to Sienna’s birth mother regularly. They want her to know how much Sienna is loved by her parents, their families and their friends, and that she’ll always be taken care of. “She says she can see it in the pictures, by the way we are looking at Sienna and the way Sienna is looking at us,” Edde said.

Getting to know Sienna’s birth mom and figuring out boundaries that work has been a fascinating process for Edde and Lorrie. The Cradle has played an important role in helping to navigate this relationship. “Both our counselor and the birth family’s counselor were tremendous assets to the whole process and will continue to be,” acknowledged Edde.

Ultimately, Edde and Lorrie feel that maintaining openness is important – especially as Sienna gets older. “Our family is growing and it is wonderful!” Lorrie declared.