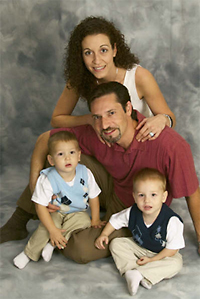 Demetri and Daniel Both Join the Family
By The Cradle Staff

Tom and Georgia Aralis traveled to Russia expecting to meet one son; instead, they met two.

The Aralises started the adoption process through The Cradle Russia Program in January 2006. Although they had originally requested siblings, they received a referral for one boy, Daniel, with promising medical information and pictures. They traveled to the Smolensk region of Russia in May 2006 to meet him. At the orphanage, they played with Daniel and took lots of pictures. Then, the translator informed them that there were problems with his paperwork and his adoption would most likely not be possible.

Heartbroken, the Aralises asked if there was another option, and they were given the file of Demetri, another boy at the orphanage. They met him later that evening, took the two small boys to play on the playground together, and quickly became attached to both. Not forgetting about Daniel, they signed Demetri’s paperwork and completed the process. A few weeks later, on June 28, 2006, his adoption went through smoothly. During a 45 minute questioning period at court, the judge was “serious and firm” but turned sweet after her decision, saying “love him and take care of him, he’s yours.”

When he was adopted, Demetri was 15 months old and weighed only 15 pounds. He was extremely malnourished, just taking his first steps and “needed love and food.” He received both, and adjusted quickly to the U.S., gaining 8 pounds in his first two months, taking to his environment and becoming attached to both parents. He “changed in features, mannerisms, and personality,” said Georgia.

Since they had first met him and left him in Russia, the Aralises were “unsure what would happen” regarding Daniel, but kept working with The Cradle Russia Program for his adoption. Fortunately, the Cradle staff, particularly in Russia, was “incredible at nudging,” helping the Aralises and making Daniel a priority. Finally, on April 26, 2007, returning to the same court and judge that had approved Demetri’s adoption, they happily adopted their second son from Smolensk.

When the Aralises brought Daniel home, he was 27 months old. It took some time for the boys to adjust to each other, after all Demetri was “king,” but now they are “inseparable,” and at a few months apart in age, could be mistaken for twins. Within a couple of months, Daniel had also adjusted to the new environment and family, and both boys were thriving.

The Aralises have a large, tight-knit Greek family of grandparents, cousins, aunts and uncles, and godchildren that has become a strong part of Demetri and Daniel’s lives. The merging of their Russian roots with the Greek heritage of their parents is a strong theme, as Tom and Georgia speak Greek to the boys while honoring their background with an open dialogue and items from Russia.

Additionally, the boys take classes a couple of times a week, and will start preschool in September. The family enjoys outings such as going to the zoo or downtown Chicago, and celebrating birthdays, namedays and the days when the boys were adopted. Demetri and Daniel are “healthy,” with “good personalities,” and no attachment issues.

The Aralises credit The Cradle with helping them throughout their adoption processes, using the right people and tactics both here and in Russia, especially keeping Daniel in the “forefront.” “I have and always will highly recommend The Cradle,” said Georgia, as the “entire process with The Cradle was easy.” She maintained that although adoption is an intimidating and life-changing event, the Cradle staff is well prepared, and even “ahead of the game” at helping its clients. In retrospect, she said, you “don’t always know what to expect” going into adoption, but thankfully she “worried for nothing.”