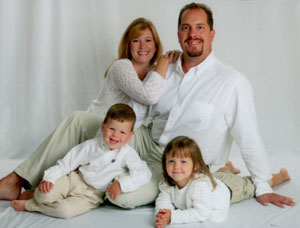 Going with the Flow: The Davis’ Adoption Journey
By The Cradle Staff

When Janet and Mark Davis initially traveled to Russia in December 2006, they shared pictures of themselves, their parents, and their home with the orphanage. By the time they returned, their future son and daughter, prepared for a new life, were calling them “Mama” and “Papa.”

The Davis family journey was not an easy one. After facing problems trying to adopt independently through the Ukraine, they turned to The Cradle’s Russia Program. Janet and Mark completed their paperwork just before The Cradle’s accreditation was to lapse in Russia. They did have an option, however. They could go on what’s called a “blind” trip — that is without a referral or any information about a specific child being given to them ahead of time. They decided to “go on faith,” as Janet retells it. They left for Russia two weeks later.

After a few days in Moscow, they took a train to the Nizhny Novgorod region. The morning they arrived, they went straight to the Ministry of Education. Unfortunately, the director they had planned to see was not available. Undeterred, the couple walked around until The Cradle’s Russia staff could arrange a later meeting. In this meeting, Janet and Mark went over their request for a child and were then sent to wait for twenty minutes in the hall. They had hoped for siblings, but were willing to accept a referral of one child if that didn’t work. As luck would have it, the official said that they had two options for sibling pairs – a boy and a girl or two sisters!

Janet and Mark were then given about three minutes to choose which set of siblings they would like to learn about. They decided on the boy and girl, and then received some information and paperwork. However, in order to see the kids, the director had to fill out additional paperwork. Unfortunately, he had again left the building, and no one else could help them. So, the couple sat in their hotel for four and a half hours waiting for a phone call in case the director returned. As it turned out, the director did not return that day, and Janet and Mark had to wait all night to see the children.

The next day, after little sleep, Janet and Mark finally got to go to the orphanage and met their future children, Paige and Jason. We “immediately fell in love with them,” said Janet, calling it an “amazing experience.” The workers at the orphanage were kind, and it was apparent that they had been taking care of the children, who were in good health and dressed up for the visit. Janet and Mark visited for an hour and a half before having to leave. Since they were soon leaving Russia, it was their only chance to see the children on that trip.

Three months later, after a bit of a delay due to the Russian holiday season, they received a court date for mid-March 2007. This time, the process went smoothly and they adopted the children without any issues or problems. The family spent a few more memory-filled days in Russia before heading back to the United States.

When they first arrived home, Paige and Jason went exploring. They got their own rooms right away, and had a few problems sleeping and settling in. According to their mother, they learned English very quickly, “like little sponges.” In fact, she advises adoptive parents to learn a little bit of Russian, as she and Mark made a cheat sheet of applicable phrases that helped immensely.

The Davis family celebrated their first anniversary in the U.S. on March 21, 2008. Paige is now four and a half years old, and spent the past year in preschool. Janet said that she has noticed an amazing difference in Paige, especially in her confidence in communicating with others. She has made many friends, and will be in kindergarten next year. Jason is now three and a half, and will start preschool next year. He follows his older sister around all the time. They enjoy riding bikes, going swimming, ballet, tumbling classes, and more, just like any other kids their age.

To sum it up, Janet said that adoption was a very positive experience for them. She noted that despite a desire to be in control, and the fact that much of the process was not in her control, it helped her to allow the experts to guide the process. Going with the flow, she reflects, can make for a much less traumatic experience.