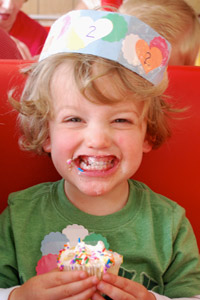 Teresa Hjerpe had known from the beginning that one day, she would adopt a child. “It was always in my heart,” she said. But she thought that adoption would be a way to add to the family she and her husband had already begun. After discovering she was unable to have biological children, however, it became a way to start their family.

Teresa’s husband, Karl, remembers her mentioning adoption to him before their wedding, but at the time, he barely gave it a second thought. “It was the farthest thing from my mind,” he said. But as it became clear that adoption was their best option, the couple embraced the idea. “Those things families pride themselves on, like passing down family blood, they’re just details. And they don’t really matter,” Teresa believes.

The Hjerpes attended a Cradle information session at a hospital in Chicago, and liking what they heard, decided to begin the adoption process. “We weren’t getting any younger, and The Cradle was the most professional and most established agency in the area,” said Karl. “We wanted a good, reputable agency that would put all the pieces together.”

Teresa and Karl connected with their son’s birth mother while she was in her 7th month of pregnancy, finding her through their outreach and networking efforts. “The Cradle encourages waiting families to take an active role in their adoption by networking, using social media and basically telling everyone they know that they are pursuing adoption,” explained Phyllis Laughlin, The Cradle’s Clinical Director of Adoptive Parent Services. “The Hjerpes’ efforts helped identify a woman in downstate Springfield who was considering adoption for her unborn child.”

An Expectant Parent counselor from The Cradle drove to Springfield to meet with the birth mother. As the pregnancy progressed, she shared information with the Hjerpes’ adoption counselor.

In early May of 2011, Teresa received the startling news that Ian had been born two weeks earlier than his due date. Karl, an airplane pilot, was just 45 minutes away from departing for Germany for a few days. Frantic to get ready in time, Teresa went on a mad shopping spree to purchase the baby supplies they lacked. And on top of everything, the couple was preparing to move. “It snuck up on us,” said Karl. “All of the sudden, Ian was here.”

Shortly after his birth, Ian was brought from Springfield to The Cradle Nursery where, the next day, Teresa and Karl met him for the first time. “It was such a beautiful moment to finally come together with our son! Honestly, it felt surreal,” Teresa marvels. “Words can’t really capture the emotional experience of that moment. We keep a photo taken that day on Ian’s dresser as a constant remind of our sweet little blessing.”

They knew that they shouldn’t get attached to the baby since the surrenders had not yet been signed, but it was unavoidable. “We were so hopeful,” Teresa recalls.

The following day, Ian’s birth mother signed the papers and the Hjerpes became parents. Once they brought Ian home, the pieces fell into place. “The best part is the unconditional love between us. The bad part is the unconditional lack of sleep,” says Karl. “You’re relieved when you finally put him to bed each night,” adds Teresa, “but then you can’t wait to see that face and hear that ‘Mama! Daddy!’ again in the morning.”

Ian, who turned two on May 9, 2013 has quite the personality, along with a flop of curly golden hair and an adorable smile. “We can brag about how cute he is because we didn’t create him,” laughs Teresa. The Hjerpes do not have an open relationship with Ian’s birth mother at this point, but are hopeful that one day they will. Until then, they will continue to write letters to her. “Ian is so loved, and I try to convey this in the notes I write to his birth mom,” says Teresa. “She’s the one who brought this beautiful child into the world. I just want to embrace her.”

After Ian came home, Teresa became involved in the Neighborhood Parents Network’s adoption group, helping to organize events for area adoptive families, waiting families and families considering adoption. This past spring, a Cradle post adoption counselor addressed the group on the challenges of talking to children about adoption. At these gatherings, Teresa still gets excited hearing about other families’ experiences. “Everyone has their own story, and every story has its own happy ending, just like Ian is our happy ending.”