THE HOWARD FAMILY SHARES THEIR EXPERIENCE 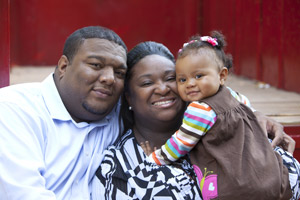 A diverse group of thirteen prospective adoptive families attended The Cradle’s Sayers Center Information Meeting at Victory Apostolic Church in Matteson on February 4. Cradle parents Ashanti and Edward Howard, who are members of the church, volunteered to speak at the meeting about adopting their daughter Katelyn.

“We talked about going through the process from the very beginning until now,” Ashanti said. “We stressed the importance of getting to know your counselor and building a relationship with them.”

The Howards were selected by Katelyn’s birth mother around six months after completing their home study and going on the waiting list. But they had three other calls during that time. Two birth moms chose other families; one had a change of heart.

When their counselor, Rachel, called them on December 22, 2010 to say, “I showed your profile, you were chosen, can you come pick up the baby?” they were somewhat shocked because they didn’t know their profile was being considered by this birth mother. After the disappointment of the change of heart, Rachel wanted to spare them further upset if they weren’t selected. This time they were, however, and on December 23 they came to The Cradle to pick up baby Katelyn, who had been in the Nursery for six weeks.

Although Ashanti and Edward haven’t met Katelyn’s birthmom, they communicate regularly with her via e-mail and texting. They also started and sent her a photo album that they update continually with new pictures of Katelyn to be added to the album.

“At the info meeting we discussed different aspects of openness – what it is for us with our birthmom, and what it can be like for others,” Ashanti said. One attendee asked, “Do you feel guilty about taking someone’s baby?” Edward explained how Katelyn’s birthmother texted them to say, “Thank you for doing something I can’t do at this time.” He and Ashanti stressed how deeply birthparents love their children and want to give them the best life possible.

Another meeting participant, who is the father of a biological child, asked whether it was difficult for an adopted child to bond with his or her adoptive parents. “Absolutely not,” Ashanti replied. “Katelyn is our baby. It’s as if I had given birth to her myself.”

The Howards also addressed the topic of education. The pre-adoption classes Ashanti and Edward took helped dispel their concerns about openness and prepare them to bring Katelyn home. “Helping you to feel prepared is one of the wonderful things about The Cradle,” Ashanti stated.