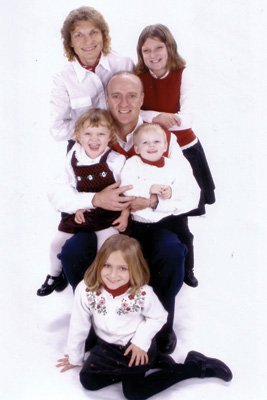 Published February 2008
By The Cradle Staff

One afternoon five years ago, Judy McCormick was picking up her daughter Jeanne from school and spied a little boy who caught her eye. Jeanne’s classmate, she learned, had been adopted from Russia through The Cradle. Judy couldn’t keep the boy’s image out of her mind. Even after her third daughter was born in 2005, thoughts of him lingered. “This idea kept coming back to me,” Judy said, “so I talked to my husband Mike about adopting a Russian child.” Nearly everyone else they talked to tried to discourage them. “Why would you want to adopt?” some asked. Others told “terrible stories” they’d heard about the Russian adoption process. Still, Judy and Mike decided to pursue their dream.

In January 2006 the McCormicks attended an informational meeting about The Cradle Russia program. Assured in their decision to move forward, they began taking in-person pre-adoptive training classes at their agency and every online course offered by AdoptionLearningPartners.org. By July they had started their paperwork, and in November 2006, their completed dossier was sent to Moscow for translation. Judy and Mike were pleased at how smoothly everything was coming together.

The McCormicks’ dossier was forwarded from Moscow to Smolensk in western Russia to be matched to a waiting child. Then their smooth process hit a major bump. The Cradle’s accreditation had expired and the Russian government had suspended all further accrediting of foreign adoption agencies. So they waited, and wondered, and waited. Finally, on July 4, 2007, the Russian Ministry of Education reaccredited 7 US agencies, and The Cradle was among them.

Just a few weeks later, when Judy was at the pool on a warm summer day, she received a call from The Cradle telling her to check her e-mail. A referral had arrived. “Wow, this is real!” she thought, and raced home to open the message that would change all of their lives. Judy and Mike received the referral of a boy, Sergei, who had been born on March 14, 2006. They immediately printed out his picture and put it on the refrigerator. Although they had some time to decide, Judy knew they would accept the referral. “The decision was made as soon as we looked at the picture,” she said.

Within days, Judy and Mike were on a plane to Russia. Meeting their son for the first time at the orphanage in Smolensk was “an overwhelming experience,” Judy recalls. Sergei, whom they later named Michael, was very shy at first, but by the third visit he began to smile. The McCormicks are grateful to the orphanage workers for their dedication to the children despite extremely limited resources. “These people took care of our son with as much love and compassion as they had to give,” she said. After a five-day visit, Judy and Mike reluctantly flew home to complete the final steps in Michael’s adoption. “It’s so hard to leave,” Judy said, “because you know he’s part of your family and you’re leaving him behind.” They weren’t separated for long, though. In early October, Judy and Mike returned to Russia to appear in court, finalize their paperwork and pick up their son. When they landed in Chicago, after 21 hours of travel, they were greeted by friends and three young girls who were very excited to meet their baby brother.

Michael McCormick will celebrate his second birthday in March and is thriving in his new home. “He was immediately part of our family,” his mom gushes. “Each day he blossoms more.” Nine-year-old Jeanne reads to Michael and mothers him, while six-year-old Kelsey likes to affectionately tease him. And although there is some sibling rivalry between three-year-old Katie and her brother, she often holds his hand and calls him “honey.” Judy and Mike believe that adopting Michael has been a critical learning experience for their daughters, as it has exposed them to a different culture and taught them to share and be compassionate. For his part, Michael is a wonderful little boy who has brought joy not only to his family, but also to their friends and their community.

Looking back, Judy can state unequivocally how crucial the preparation process was for her and Mike. “Education and awareness are so important,” she affirms, “and we were well-prepared.” They also appreciate their agency’s extensive post-placement support. There is always a degree of uncertainty in international adoption, but according to Judy McCormick, “the rewards far outweigh the risks. For us, The Cradle made all the difference in the world.”