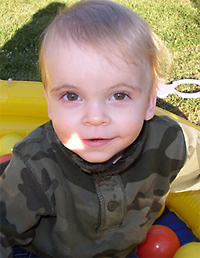 According to Stacey Petrick, the hardest part of meeting her future son Theodore was coming back to the United States without him after their first trip. Already attached and knowing that he would eventually be part of her family, she thought, “he’s way over there and I’m way over there.” A few weeks later, they returned to adopt him.

The Petricks first came to The Cradle following a recommendation from a close friend who had adopted through the Russia Program. After an informational meeting they decided to start the adoption process, which Stacey reflected they would have wanted to do even if they had biological children. During the process, members of The Cradle staff were “available morning, noon, and night” to answer questions and provide help, especially leading up to the Petrick’s trips to Russia.

Stacey said that she probably never would have traveled to Russia if it was not for the adoption, and considers that it was an experience of a lifetime to see that country. On their visits, she and Glen had the opportunity to walk around and see many of the sites.

Bringing Theodore, or Teddy as he is nicknamed, home from Russia was a harrowing experience, since he was scared and slept only 3 out of 11 hours on the flight. He has adjusted quite nicely since then, however, and is a happy, healthy, and well-mannered child. His parents plan on enrolling him in activities this summer, such as a day camp a couple of days a week and swimming lessons since he loves splashing in the water. These opportunities will allow him to meet other children and enjoy resources such as the great park districts in the area.

Stacey is now working on a scrapbook for Teddy that includes pictures of his orphanage and hometown of Smolensk, his first day in America, and meeting his new family, which includes loving grandparents, aunts, and uncles. He loves looking at pictures and asking about the people and places in them. This will be a great way to share his adoption story with him through the years.

Having successfully incorporated Teddy into the family, the Petricks are now considering adopting a little girl sometime in the future.