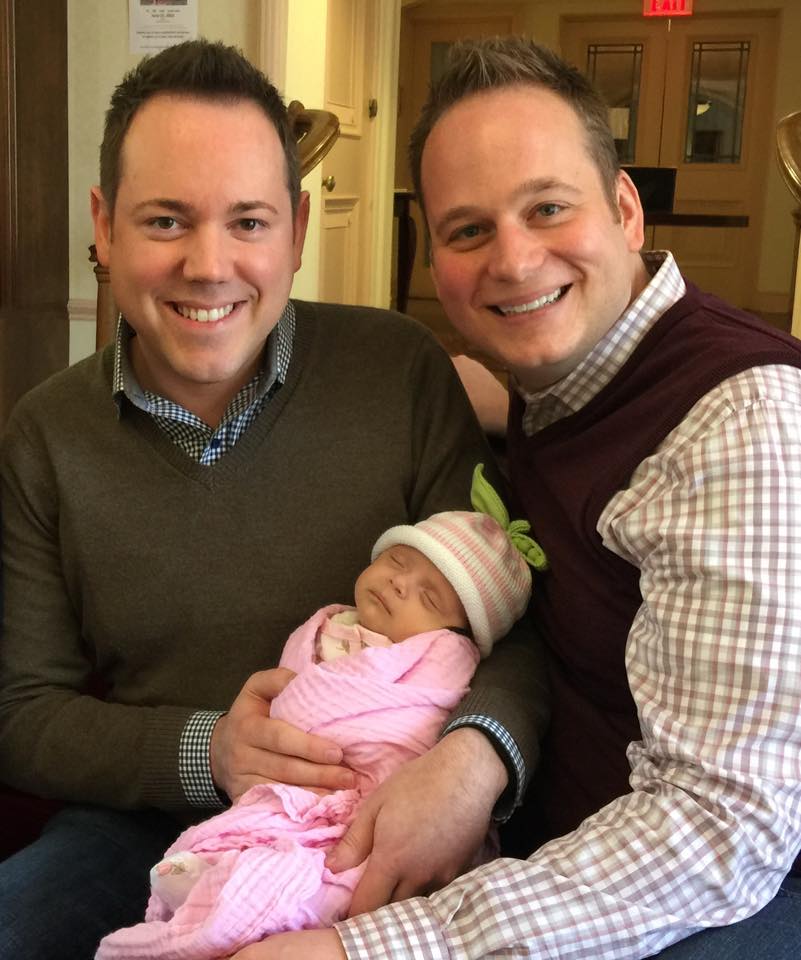 When Eric Hellige and Phil Quick brought their daughter home from The Cradle, they were prepared for a challenging transition into parenting.

“Friends with kids had warned us there would be ‘those days,’ but there really haven’t been,” Phil says. “Abigail is the easiest baby. She started sleeping through the night when she was four months old. She’s social, happy, easy – we are so lucky!”

Eric and Phil are both from Chicago and met in 2006. Eric recalls on their first date, Phil made it clear that children were going to be part of his future. “I hadn’t necessarily thought about kids at that point, but Phil clearly had and it was important for him, so I started thinking about it and realized it was something I could see for myself too,” Eric says.

The couple married in 2010 and were busy moving, setting up their home, and managing two busy careers. After two years, they were ready to start their family, and adoption was “Plan A.”

“We thought about surrogacy, but never really pursued it,” Eric says. “Once we decided on adoption, we wanted to go with The Cradle because of the reputation and the fact that The Cradle cares for everyone in the adoption circle, including birth parents.”

They moved through the home study process relatively quickly, going on The Cradle waiting list in January 2014. And then… they waited.

“We had six or seven situations that were presented to us where we were not chosen,” Phil says. “We never got into a match or even had a match meeting, but we came close a few times, so after a year of that we were pretty discouraged.”

They sought support from their counselor, Sue Puffpaff, and by reaching out to another Cradle family who had two children at home. “We met with Mike and Chris McGuire, and that was really helpful,” says Eric. “They gave us the perspective as another two-dad family that we found so valuable.”

It was springtime, 14 months since they had been on the waiting list, when they got the call that would change their lives. There was a baby girl in The Cradle Nursery, and the birth mom wanted to meet them. The match meeting was scheduled at The Cradle.

Abigail with Santa at The Cradle Holiday Party,
December 5, 2015

“We were so nervous!” Phil recalls. “We wanted to bring some kind of gift, but we didn’t know what would be appropriate, so we ended up baking three different kinds of cookies and then we had to find the right box, and arrange it just so… it was the most important meeting of our lives!”

The match meeting ended with the birth mom choosing them as the adoptive parents for her baby. A few days later, they met baby Abigail in The Cradle’s third floor Nursery.

“I just remember seeing this shock of dark hair,” Eric recalls. “The nurse walked in and handed her to us and I was so struck by her.”

It took a few days for the paperwork to clear, so the new dads visited Abigail every day, getting to know her and giving her time to get to know her new family. “I had always hoped I would be able to take a baby right home from the hospital, since it just seemed sort of sad that a baby would be in the Nursery, without a family,” Phil said. “But once I saw how the nurses and volunteers cared for and loved the babies, I felt so much better, and we loved having that time to get to know our daughter through daily visits.”

Abigail came home on May 13, 2015 to a loving and overjoyed family. Her dads have been through a lot of changes in the last year, including a move to a new home and job changes for both of them, but the transition to becoming parents has been easier than they had expected. Easy enough to think about baby number two?

“We both have siblings and so we think about having a second child, but wonder if we can get so lucky twice,” Phil muses.

“We figure we have time – we can think about it when she’s two,” Eric says.

Abigail, smiling, toddling and happily drinking her milk from a sippy cup, is perfectly enough for now.